Eurohorror of the Month: RETURN OF THE EVIL DEAD (1973) 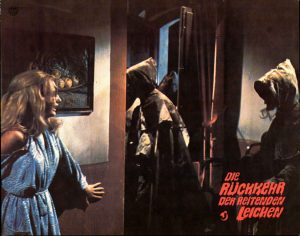 They’re evil! They’re dead. They’re also blind. That’s right, they’re the Knights Templar, back in the first sequel to 1972’s TOMBS OF THE BLIND DEAD. Known in its native Spain as EL ATAQUE DE LOS MUERTOS SIN OJOS (‘The Attack of the Dead without Eyes’), this one sees writer/director Amando de Ossorio ramping up the visually impaired undead carnage to a whole other level.

Although only the second in the series, these days RETURN would be considered more reboot/reimagining than sequel, given that it ignores the previous film and rewrites the Templars history. Back then, the realities of international distribution meant there was no guarantee that this would appear in overseas cinemas after the first one; even if it did, the usual retitling shenanigans would see to it that most punters wouldn’t know this was a sequel anyway.

Five hundred years ago, in the small Portuguese village of Bouzano (‘Berzano’ in the last film), an enraged mob of citizens take matters into their own hands to end the evil Knights’ reign of terror, burning out their eyes with torches (pecked out by crows on the gallows last time) for good measure when the Templars’ leader vows to return from the grave for revenge. Cut to the present, and the villagers are hard at work preparing for their annual fiesta in celebration of this victory, although for most the events have passed into the realm of simple folklore.

Enter Murdo (José Canalejas), perhaps the most loathsome ‘village cripple’ (yeah, I know) in celluloid history, who immediately loses any viewer sympathy he might have so far mustered by slaughtering a girl he’s kidnapped, in blood sacrifice to our nightmarish Knights. As the villagers begin their revels in the town plaza, the crusty old Templars emerge from their cobweb-strewn tombs, mounting their undead steeds and heading straight to the party. 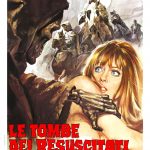 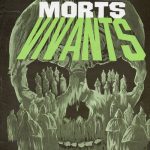 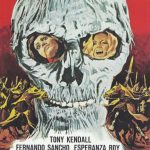 Meanwhile, supercool bell-bottom-rocking Captain Jack Marshall (Italian actor Tony Kendall) has also blown into town, hired to oversee the firework display. Marshall instantly gets on the wrong side of tubby, middle-aged Mayor Duncan (spaghetti western legend Fernando Sancho) and his chief heavy Dacosta (Spanish genre regular Frank Braña) by rekindling a past romance with Duncan’s younger fiancée Vivian (Esperanza Roy of A CANDLE FOR THE DEVIL). But all such differences must be put aside if anyone is to survive the rapidly approaching night of bloody Blind Dead terror…

While RETURN doesn’t quite manage to recreate that chilling, lingering sense of pure ancient evil that made TOMBS so unforgettable, it’s a more coherent proposition and certainly tops its progenitor in terms of action. We see the Templars massacre a whole square full of people for one thing, and our tough guy hero is a damn sight better at fighting back than the hapless Roger (César Burner) was in the first film. Marshall and a handful of survivors (basically all the characters mentioned in the last paragraph) manage to hole up in a church for a siege-based second half, taking us unashamedly into NIGHT OF THE LIVING DEAD territory, with all the tensions and infighting that this entails. And while the Templars and Murdo are ostensibly the villains of the piece, you’ll be ‘boo-hissing’ more at the increasingly despicable lengths to which Duncan goes to save his own worthless hide. 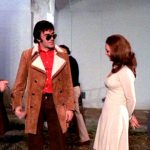 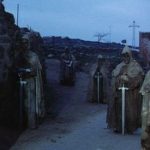 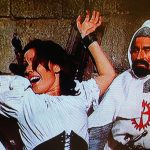 What does let the film down somewhat is the lazy decision to recycle footage from TOMBS; namely the Templars’ iconic rising from the grave and most of the slo-mo shots of them riding across the plains on horseback. Great as the latter are, we already had to forgive the dodgy day-for-night shooting the first time round. Added to this, Tony Kendall (real name Luciano Stella) is perhaps slightly too much of an unreconstructed seventies ‘medallion man’ for modern audiences to take seriously, even though he is a decent actor. He also top-billed Ossorio’s THE LORELEY’S GRASP that same year. Pedants will have fun laughing at the fact that Templars conveniently stand still whenever he sets fire to one of them, but I’ll take that practical shit over seamless CGI any day of the week. 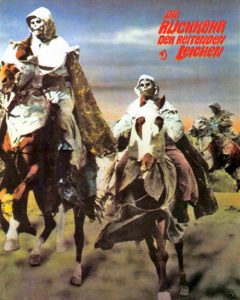 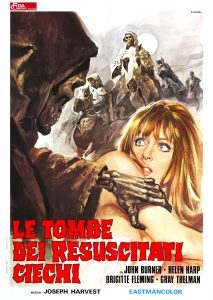 In another change from the first film’s lore, the Templars here seem to have eschewed their vampiric tendencies (although the leader still chows down on an unfortunate sacrificee’s heart in the opening sequence) in favour of more simple hacking and slashing, which makes sense when you consider that the ‘contagion’ element didn’t really go anywhere last time. There’s another significant difference, of vital importance to our heroes, but I’m afraid it would spoil the ending if I told you what it was.

Some fans consider this to be the best of the series; I tend to err on the side of TOMBS. What you get here is a fast-paced and gory undead attack narrative, with a love quadrangle (Dacosta also has the hots for Vivian), scary monsters, a rugged, chain-smoking hero, and a handful of good suspense setpieces. Can’t say fairer than that. Catch the Spanish-language version if you can, as the dubbed US cut is missing four minutes; including the scene where Murdo sacrifices the girl, which not only defines his character but sets the whole chain of bloody events in motion.