Inspired by various accounts of hauntings and spookery in the town of Sugar Land, Texas, The Summoning deals with spirits returning from the other side to contact the living. Check out the trailer below.

The film was written and directed by Alberto G. Rodriguez and produced by two-time Emmy winner Cristian Luna. 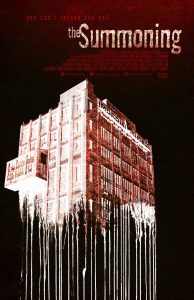 “I had a great time working on The Summoning in Texas,” says Adkins in the film’s press release. “Eric Roberts and Razaaq Adoti were both great in the film as well as on set. I learned a lot from working with them, as well as Jaime Zevallos and Leila Almas. This movie has a lot of great elements to it, offering something for all film lovers. It is character-driven, has plenty of action, and is an emotionally moving story. I hope you love it!”

According to the release, the cast and crew experienced an “eerie presence” while filming in the historic and famed haunted sites of Imperial Sugar Company refinery and the Richmond Police Department.

The Summoning will be released worldwide on January 10th, through Gravitas Ventures.