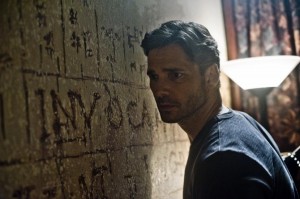 Eric Bana really has got his work cut out for him in Deliver Us From Evil, the new supernatural horror/thriller. In the new film, Bana plays New York Sgt. Ralph Sarchie, a hardboiled cop who discovers that his latest suspect is actually a demon from Hell. Deliver Us From Evil, based on the accounts of former NYPD Sgt. Ralph Sarchie, directed by Scott Derrickson (Sinister), and starring Eric Bana, Edgar Ramirez, Joel McHale and Olivia Munn is released on UK DVD and Blu-ray January 5th 2015.

SCREAM: So has this shoot been an interesting one for you, because it feels a little bit like a departure of the kind of other films that you do?

Eric: It hasn’t been a huge departure actually, because essentially it’s a poised thriller that then has supernatural elements, so whilst it does spin off on a tangent and goes toward it’s genre, at its heart it’s a classic thriller, so that side of it doesn’t feel overly different, but I am a big fan of Scott’s (director) work and I feel like I am in great hands and the scary side for want of a better term, has been a lot of fun.  It’s a very specific area of filmmaking that I would not have been comfortable with for instance it was a first time director.  But Scott’s track record and his eye for detail and understanding and respect for the genre is unbelievable.  So, it’s been a lot of fun.  It’s been fun because of the level of trust that I have for what he’s doing.  It would be scary in other ways I think if you were making a film like this with someone that hadn’t done it before.

SCREAM:  To have Ralph (Sarchie) also on set, has that been interesting for you because obviously you could maybe pick up some affectations throughout the whole day.

Eric: He’s fun to hang out with, so he’s been a really wonderful presence for everyone and he’s a really lovely guy, has great stories, but he’s very intense, but he’s also very funny, and it’s been great for me, and he’s never once stepped on my toes or said things, he hasn’t forced himself upon any situation, which is incredible.  I mean I know what it’s like to have part of your character or past turn into a film, and he’s been ridiculously calm and fantastic about it, so it’s been great.

SCREAM:  Did you do any research for Exorcisms?

SCREAM:  What kind of things?

Eric: I really don’t want to talk about it too much, but other than to say I saw some materials that, some I am glad I saw and some I wish I hadn’t have seen, so that’s about as much as I would like to elaborate.

SCREAM:  Did it change your impression of what you had previously then?  Did it kind of add to certain things?  Do you really believe in this kind of stuff personally?

Eric: I one hundred percent believe that there are people who, no matter what you want to call it, who are suffering immensely because of what they are experiencing, like one hundred percent.  What you call it, how you describe it, how you paraphrase it, I think that’s the right of every individual.  But I saw enough to be very moved and very scared.  Both.

Eric: Well fortunately for me, he’s brilliantly written and it’s a reason I signed on for the film, it wasn’t because of the genre, it would be fun to do this genre, this would be fun to do this kind of movie, that was all an added bonus, but at the core was just a really, really well written, interesting character that I just latched onto immediately.  And it would be a huge challenge and interesting and fun to play.  I mean not fun in the sense, fun as an actor, but interesting and there’s a real journey there for the character and to really simplify, the thing that I loved about the character, all the elements and procedural elements, and drama and thriller and genre, besides all that, at the core of it to me, is, it’s about a man who is so used to procedure, procedure, procedure, and the beats of one thing leads to another thing and leads to another thing, and so as long as you follow those beats, you get to a conclusion, you can solve a case, you can catch the bad guy, but he can’t complete that journey because of something that he’s done in his past that is controlling him without him knowing it, and I really liked that notion that we don’t really get away with anything, when you see someone do something or hear someone get away with something, and they are kind of getting away with it, and I would like to believe that in some way, they actually don’t and we don’t.  We carry with us the burden or the guilt of the things we do or have done, like you pay for it in some way and in this story, this character pays for it in a very big way and cannot actually complete the job that he is put on this earth to do.  And I found that really, really fascinating and having to come to terms with what you have done and there may be a point in your life where you have to make a decision about what you have done in the past and in order to move forward.  So at the core, a very, very emotional idea, but a very brutal character and I really like that juxtaposition.

SCREAM:  So much of the film is shot at night, there’s rain, you are in the Bronx and all that kind of stuff, has that helped you in terms of your performance and the practicality of the shoot itself, did that kind of add to the experience for you?

Eric: Well I would like to think that it wouldn’t add to my performance.  This is the second day that we have been in a studio for the whole film, so every night has been on the street, in the Bronx, and everyone being, by filming standards, very uncomfortable circumstances and deliberately finding the most interesting basements that you can’t stand up in and spending days down there and just, from a production point of view, finding really interesting locations that are not conducive to set visits.  (laughter) So it will make the film look incredible and we are really one of the few films to shoot on the streets of the Bronx for a long, long time, and I am proud of that fact, and I think it will really add to the film, I would not have liked to have made this movie in Australia, (laughter) try to cheat Melbourne for the Bronx, so the first thing I said to Scott when I met him was, please tell me we are going to shoot this in New York and not some tax break place somewhere.  And he was adamant, he was like no, we are going to shoot in the Bronx, I’m like sure, wielding the set and the backdrop.  (laughs) But here we are, so that’s great.

SCREAM:  Would you say that this movie is about faith?

Eric: Well, he’s my partner, he’s my police partner, and he’s been great, because my background was standup comedy for years before I started acting and Joel still actively does standup and so we hit it off immediately, and Scott, he’s very close friends with Joel and he was really keen to have us together, cause he knew that we would be able to ad-lib and muck around and that is what cop relationships are about, putting shit on each other, and being mean to each other, and teasing each other, and having a laugh and it’s a lot of gallows humor, and he’s really let us free with that sort of stuff, and we’ve had a great time, he’s been wonderful to work with.

SCREAM:  Because of the improv aspect, are there things that you guys explored, just kind of bouncing off of each other that kind of ended up on the screen?

SCREAM:  Maybe turned the storyline a little bit even?

Eric: I wouldn’t say it turned the storyline, but helped sell the idea that these guys are partners and have been partners for a long time.

SCREAM:  Which movies inspired you to be able to build this cop character?

Eric: None.  I never research other films for films, I think it’s really dangerous.  I mean, I think you get influenced as a kid by lots of different things and someone asked me, what’s this like, I said, it’s like a cross between NYPD Blue and The Nightstalker.  (laughter) Two of my favourite shows when I was a kid.  But I haven’t gone back and watched a single episode to prepare for this, but I deliberately don’t like to watch movies, I would rather go research real things.

SCREAM:  Because Olivia (Munn) is not here, what was it like to kind of work with her and how does she fit into the overall tone of this film?

Eric: Same as Joel.  The biggest problem I had with Olivia was having us stopping laughing for work.  She’s very, very funny, I know everyone knows that, she’s hilarious, and she played my wife which just made it, the days lit up when she was on set, she didn’t have many days on the film unfortunately, I wish she would have had a lot more, but it was a great pairing, I was very excited when they brought up her name, I was like, I would love to do that, it sounds fantastic and it was, it was great to work with her.  I think she’s really a good actress and I think her work in this was really interesting and to what we have seen her do before.

SCREAM:  Edgar gave a really interesting story about early on in the shooting that maybe something kind of strange happened to him in one of the scenes, so has anything kind of irregular happened while you have been shooting this film?

Eric: There have been very odd coincidences, but nothing scary has happened to me since the making of the film.  Aside something being thrown of a window maybe. (laughter)

SCREAM:  Thank you for talking to SCREAM MAGAZINE. 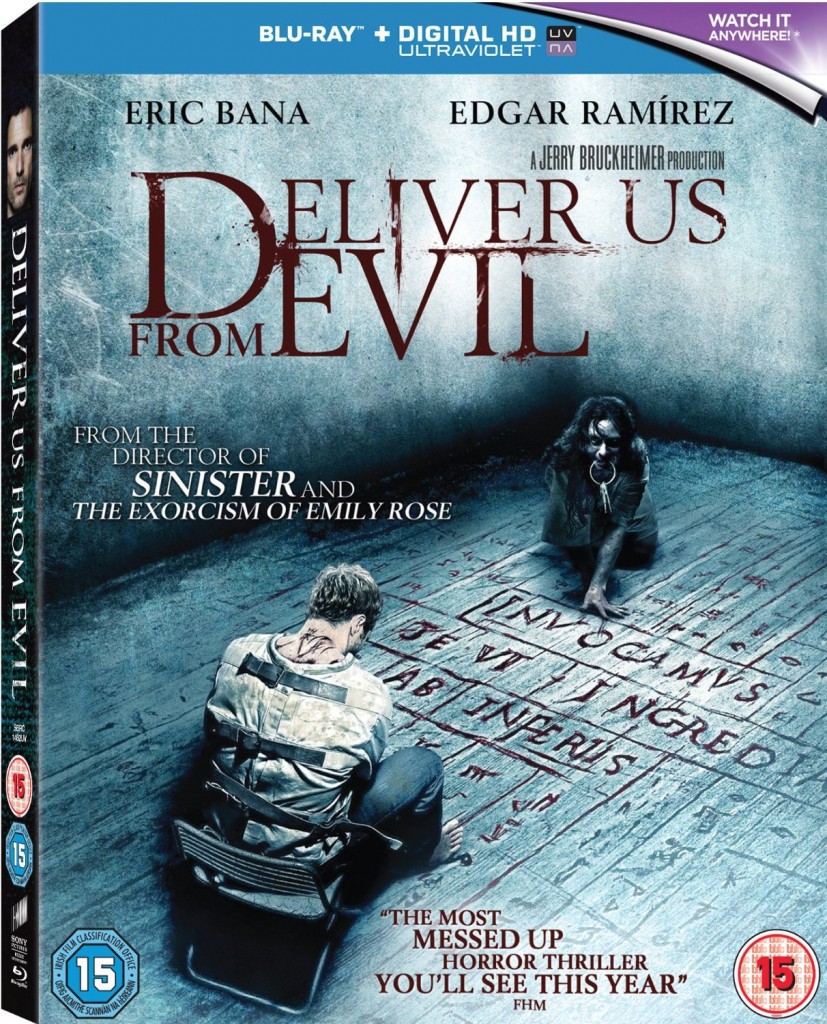