Stephen King’s summer 2016 release offers his Constant Readers the conclusion in the detective Bill Hodges series that started with the excellent mystery-thriller Mr Mercedes in 2014.

In Mr Mercedes, King diverges from spooks and scares to give us his tribute to hardboiled crime fiction and suspense that he also offered in the shorter works of Joyland and The Colorado Kid. The series kicks off with retired detective Bill Hodges on a wild goose chase, tracking down sadistic serial killer Bradley Hartsfield who has mown down a group of people in a stolen Mercedes and then plots a large explosion at a local concert arena. His plan is foiled by Hodges and his partners through elaborate last minute investigating which concludes with Hartsfield’s head being bashed in.

While the second volume in the series Finders Keepers does not involve killer Bradley Hartsfield, it does centre on detective Hodges as he uncovers a 30-year old cold case, the murder of author John Rothstein. This story was of particular significance to book lovers as it centred on a writer, the craft of writing and even a rare book dealer.

Which brings us to King’s latest, End of Watch, sure to be the summer blockbuster of the year. Bradley Hartsfield is living in a brain trauma clinic (coincidently in room 217… redrum?) under Det. Bill Hodges’ close eye. 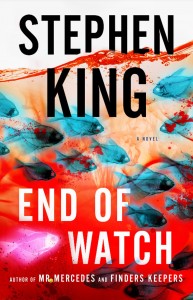 Hodges and his crew are alerted to a murder-suicide, the victims of which have ties to the bloody ‘Mercedes Massacre’. Thus begins a string of suicides, people close to Hodges and his partners Jerome and Holly, as well as vulnerable victims of Hartsfield’s choosing. But how can a once violent now nearly comatose killer conduct his new bloodbath? This is where King’s trademark supernatural flare returns to delight and terrify.

It is not paramount to have read the first two in the series in order to enjoy End of Watch, but it is certainly helpful. You will still fall madly in love with King’s heroes; Hodges, Jerome and the eccentric and often funny Holly. King knocks the thrill factor to his highest level and while the supernatural plays a background character, King’s terror level is unnerving and truly discomforting throughout. The master of suspense concludes the thriller with one of his most emotional endings in recent memory. King fans, this one is a must!