America Horror Story and Scream Queens star Emma Roberts has been cast in the upcoming adaptation of the graphic novel Anya’s Ghost. The story has an intriguing premise and follows a girl called Anya who discovers a ghost in an underground cave.

The ghost, called Emily, will be played by Roberts and Anya is yet to be cast. 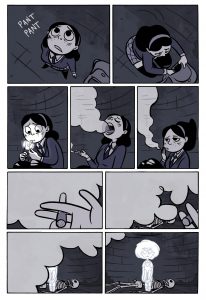 The film is described as a supernatural comedy, so don’t expect to be terrified out of your skin, but do expect a darkly comic tone as the appearance of Emily does come with circumstances that threaten Anya, her friends and her family.

Dan Mazer (I Give it a Year) will direct the film which is based on Vera Brosgol’s novel and a script written by A Monster Calls’ Patrick Ness. When speaking about the film, producer Jeremy Bolt said:
“Patrick is so passionate about the source material, and his screenplay is fresh and distinctive. We love Dan’s vision to make a classic high school comedy with a supernatural twist.”

Anya’s Ghost is currently in development, so look out for a release date soon.