Emilia Clarke is edging into the horror genre with her role in Voice from the Stone and the new trailer – which you can check out below – shows her involvement in a supernaturally nightmarish situation. 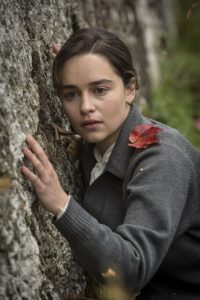 Voice from the Stone follows a nurse called Verena (Clarke) as she is hired to help a young boy who hasn’t spoken a word since the death of his mother. As the trailer shows, he hears a voice that those around him believe to be his mother’s, but when Verena notices spooky and strange goings-on, she isn’t willing to find out who it is and chooses to make a run for it. Seems like the perfect reaction if you ask me.

Voice from the Stone comes from director Eric D. Howell (From Heaven to Hell) and he directs a script written by Andrew Shaw, based on the novel by Silvio Raffo. The film will be released in the USA on 28th April 2017.