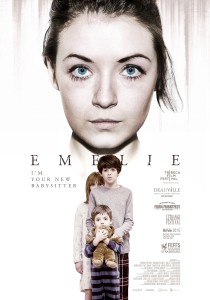 Synopsis:
Three children get the babysitter from hell when their usual babysitter’s friend Anna is entrusted to look after them when their parents go out for the night.

Emelie explores the ultimate fears of every parent when a babysitter is revealed, in all honesty, to be a total psycho. She feeds their hamster to a snake – because the snake deserves a treat (sob) -, lets them play with a gun (Oh, America!) and steals their mum’s jewellery (thief!). In short, she’s a bit of a bitch. The bad babysitter is played by Sarah Bolger (The Moth Diaries, The Lazarus Effect) and she brings her hellish character to life pitch-perfectly. Her innocent exterior emanates innocence, but through one simple action, like a roll of the eyes or a supposedly guiltless question, it’s clear to see that she’s hiding some inner darkness and has sinister intentions for all.

Director Michael Thelin handles the film superbly and brings this horror story to life in an effectively simple way. Proving that a film doesn’t need to be found-footage or awash with hand-held cameras to be real, there’s no abrupt editing or showy camera movements. Solidifying the film’s dedication to portraying reality, rather than fantasy – despite the children’s desires to play dress-up – Emelie puts a limit on its use of music, sticking to mostly natural lighting and playing out in, almost, real-time, allowing the film to keep its foot firmly grounded in a world we can easily associate with. The children play children and, may I add, are a joy to watch. It’s no wonder Anna has her heart set on this family, those kids are adorable. It’s easy to sink in to the homely horrors of Emelie and believe what we’re seeing, because of this. Many home invasion films fail, because their situations are unbelievable and the events that occur can be considered far-fetched. Emelie, however, presents a wholly real presentation of an invaded home and is all the scarier for it.

Emelie is not a film that’s going to give you nightmares or leave you waking up in a cold sweat, but there is a superbly sinister vein running right the way through it. From the opening moments the film sets a softly eerie tone as we are greeted with a quiet, picturesque town in the midst of autumn. The camera flows seamlessly as it tracks a young boy on a bike, before we reach the, soon to be, home of horrors Emelie is set. It’s not long before the new babysitter is introduced and if you’ve read the plot of the film, you’ll know she’s up to no good. The fun is trying to work out why she’s wreaking havoc on this family – if there is a reason at all. Anna quite obviously has psychological and emotional issues; she tells the children they can be anything they want (a killer? A psycho, maybe?) and that it’s okay to destroy things for fun. Her reign of terror begins with these slightly worrying comments before escalating in to petrifying territory. 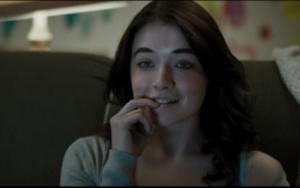 There’s more going on in the plot than it would have you believe. This film is more than just about a woman seeking out a family and wishing to cause them pain. Emelie works as a subtle and horrifying exploration of the female psyche as the audience are drip-fed insights in to Anna’s emotionally unstable mind. There are reasons behind her manic behaviour and Anna is more than a 2-dimensional character who is purely driven by madness and a desire to hurt children. That’s not saying she isn’t mad and doesn’t want to hurt children, because she is and she does, but there’s underlying issues within her that drive these berserk motivations.

The film’s main power is in its restraint Despite the heinous events that are playing out, the film manages to carry a slow-burn pace throughout. There is a wonderful build-up of tension as the scenes at home cross-cut to the mother and father at dinner, forcing the audience to scream “come home!” in their heads. Of course, by the time they come back, it’s too late. There is a certain amount of predictability which Emelie cannot escape and it does, overall, follow a very formulaic path. Nonetheless, it never feels tied down by the sureness of its plot, because Bolger’s character is so enjoyably twisted. Furthermore, the script is strong and raises Emelie above invasion films like The Strangers and The Purge which depend on action and fast pacing. With much of the film relying on dialogue to propel the scenes forward, Emelie’s greatest scenes are the simple ones that prove that less can, sometimes, be more. Like a ticking time bomb, we know that Emelie’s plot has to come to an end when the parents journey home, so an air of suspense is instantly initiated and it heats further and further as the runtime diminishes.

Emelie is a difficult one to review, because it’s best to go in knowing very little. It would be easy for me to list all the mad things Anna gets up to in a way to encourage you to check this film out, but that would spoil the fun. In short, this is a great little flick that is propelled by unrelenting tension and great performances. It never feels let down by its formulaic structure, even if you’ll probably predict where it’s all going to end up. Anna can’t walk in to the sunset after causing all this pain, can she?