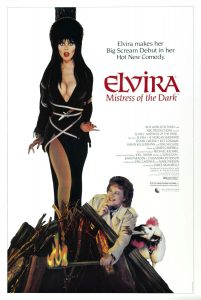 The 80’s were a great time for comedy horror films, and the decade was responsible for some of the best examples of the sub-genre. Of these, none are more titillating than Elvira: Mistress of the Dark, a film that pokes fun at horror tropes and subverts typical horror conventions. Having risen to fame hosting B-grade horror movies in LA, Elvira is a subversion of the seductress archetype, whose personality is more ditzy valley girl than gothic enchantress. This combination of spooky and silly afforded Elvira a massive audience in the early 80s, enabling her to star in her first feature film in 1988.

Elvira, a horror host at a local TV station, dreams of performing in Las Vegas but needs $50,000 to establish an act. When her estranged aunt Morgana dies and includes her in the will, Elvira travels to the small town of Falwell Massachusetts in order to claim her inheritance. Although she only receives a house, a cookbook and a poodle, it soon becomes apparent that there is more to these items than first appears – especially when evil uncle Vincent appears on the scene. Naturally, it isn’t long before the small-minded townspeople turn against Elvira, but Morgana’s cookbook – which is actually a book of powerful magic – means that she may be able to defeat Vincent once and for all.

Although Elvira has a penchant for low-cut dresses and salacious one-liners, the film is surprisingly empowering, establishing Elvira as a curious example of the feminist heroine. Despite her constant stream of sexual innuendos, Elvira is generally oblivious to the way men react to her, acting bemused or surprised when they misinterpret her friendliness. She is sexually harassed on three separate occasions in the film, and she defends herself admirably each time. These men are portrayed as slimy or stupid, and it’s never once suggested that she deserves it for dressing revealingly. But what’s more is that Elvira takes a great deal of pleasure in who she is, in the way she dresses and behaves. She isn’t trying to impress or seduce anybody, but she also refuses to conform. Though Elvira gets the guy, defeats evil and narrowly evades getting burned at the stake, she never feels the need to change who she is; she doesn’t need to comply with the rules of any small-minded town.

Over the last few years, the film has established itself as a staple of queer cinema – not just because of Elvira’s appearance on two seasons of Rupaul’s Drag Race. The film utilises the classic fish-out-of-water narrative, with Elvira finally overcoming the prejudices of a parochial mindset. Despite being called a “slimy, slithering succubus, a concubine, a streetwalker, a tramp, a slut, a cheap whore” by the aptly named Chastity Pariah (Edie McClurg), the film makes it very clear that it is the town that has the problem. Though Elvira is good-natured and personable, the townsfolk are never able to see past her provocative style of dress, leading to them gleefully trying to execute her in the town square. When Elvira saves the day and performs in Las Vegas at the end of the film, it’s a potent reminder that success is only achieved by believing in yourself, even when nobody else around you does. 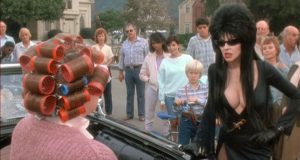 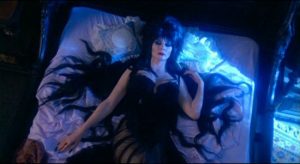 Although the film could never be classed as an out-and-out horror movie, the film does successfully subvert horror tropes, particularly when it comes to the treatment of women. When running away from her demonic uncle Vincent, instead of tripping and falling, Elvira uses her stilettos as weapons, plunging a six-inch heel into his forehead. When resigned to the kitchen. Elvira inadvertently conjures a demon with Morgana’s spell book, which she then uses to exact revenge on the townsfolk. There are times when the film falls into self-parody, when the jokes are taken just a tiny bit too far, but Peterson’s Elvira is so charming and likeable that this can easily be forgiven.

Elvira: Mistress of the Dark is probably one of the best horror comedies ever made, filled with sexually suggestive jokes, cheesy special effects and some deliciously bawdy set pieces. But in spite of its irreverent sense of humour, the film has so much heart that it’s not difficult to see why it has gained such a huge cult following in the last few years. Though it does seem a little dated now, Elvira: Mistress of the Dark – with its dizzily gothic heroine – is a delight from start to finish.