Elvira Gets Her Own Pop! Vinyl Figure 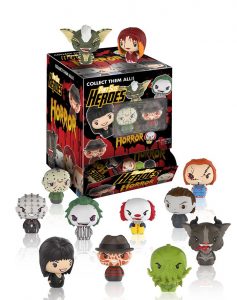 The iconic Elvira Mistress of the Dark will be getting her own Pop! Vinyl Figure courtesy of Funko and it’s fabulous. Almost as fabulous as the mistress herself, she’s striking a sophisticated pose and dons an intricate and impressive replica dagger.

The Pop! Vinyl Elvira will be 5” tall and will form part of Funko’sRock Candy collection which also features figures of Luna Lovegood, Lara Croft, Harley Quinn and Batgirl. We’re, of course, excited to see some more horror icons in that collection!

Elvira will also feature as a figure in Funko’s new Pint Size Heroes collection and joins other horror A-listers like Pennywise, Pinhead, Chucky and Beetlejuice. They will be available in August, so will make a nice summery treat for any horror collector.