Synopsis:
When a woman is brutally attacked and raped in her own home, she is changed forever. When she learns the identity of her attacker she is drawn into a dangerous game where no one is the winner.

Elle is one of the most strangest films you’ll ever see. It’s a bizarre, fascinating and unique little beast that is as unpredictable as they come. It twists and turns joyously, crafting a thriller that is both impossible to turn away from, but at times, uncomfortably strange. For this reason, Elle will probably be instantly loved or hated by its audience. I teeter on the fence, leaning towards the side of love, but still feeling as though something is fully preventing me from screaming its praise from the top of my lungs.

With Paul Verhoeven at the helm, it should be no surprise to learn that as soon as Elle begins you’re greeted with something a little odd; a mixture of comedy and darkness that will conjure a feeling inside that will be difficult to describe. The film opens with Michele Leblanc’s (Isabelle Huppert) attack, but you’ll only hear the screams and crashes of glasses as she fights to defend herself. We are left to imagine the visuals of the scene ourselves, for now, being given an intense close-up of her cat’s face as he unknowingly watches the horrors before him. This darkly comic tone is carried throughout Elle as it shifts and shapes itself into a wickedly funny nightmare about sex, lust, secrets and mysteries. This is one dramatic thriller with a basic instinct to bubble with humour and seduction at every opportunity and it is totally gripping because of this. 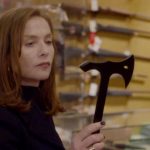 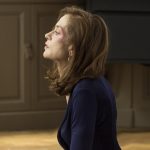 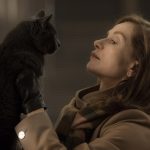 Michele is a strong-minded, assertive and confident CEO of a video game company and on the first-glance it would be easy to assume her attack has had no affect on her demeanour. She cleans the broken glass before she washes the blood from her legs, suggesting that she is more concerned with getting her home in order than herself. Perhaps she’s desperate to put it behind her, believing she is strong enough to carry on as if nothing happened. However, her sub-conscious is unwilling to let that happen with her mind drifting back to the incident in dramatic and detailed flashbacks. A look at her cat reminds her of the moment the man broke in and she tells the feline, “You didn’t need to claw his eyes out, but you could have at least scratched him.” There’s that killer sense of humour again. She’s a complex and beguiling woman that mirrors the feel and tone of the film itself. The struggle she has in sustaining her self-assured persona; where one moment she’s kicking ass in a business meeting, before going home and looking worryingly out of her windows, purchasing pepper spray for defence (and then hilariously using it on the wrong man), reflects Elle’s inability to stick to one vein itself. In simple terms, the film’s meandering mood and humour is a careful reflection Isabelle’s inner battle and exterior fight as she undertakes the, what should be impossible, task of maintaining a façade of normality when everything is as far away from normal as it could be. 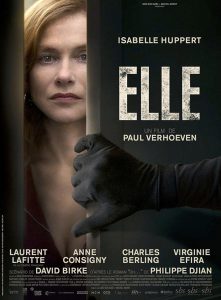 Isabelle Huppert is astounding in the lead role as Michele. Bringing to life such a complex character must be a difficult ask, but Huppert appears to sink into Michele effortlessly, homing in on the complexities of her personality in a way that is jaw-droppingly believable. As a character, Michele is, let’s face it, barmy.  When Michele discovers the identity of her attacker events fully escalate into a blend of violence and lust; which I would argue is when the film gets a bit too weird and difficult to understand. Her actions are sometimes outrageous, but Huppert is able to craft and deliver a woman that is convincing, thanks to her own confidence and belief in the character. Without this, Michele would have been in danger of feeling to obscure and the events far too unbelievable, but Huppert’s is careful, striking and flawlessly persuasive, making it almost impossible not to be on board with this mosaic of thrills and comedy.

For all its positives, it is difficult to entirely fall for Elle’s roller-coaster of charms. Perhaps the events are just too unbelievable or perhaps the mixture of comedy and thriller tropes is just too puzzling. Elle’s lack of definition is both its saving grace and its downfall. Elle is awkward, something that undeniably fascinating, but difficult to love. It’s odd, it’s seductive and it’s definitely worth seeking out, but I can’t seem to rid myself of the niggling feeling that there is something missing beneath Elle’s multiple layers of obscurity.