The dedication page on Stephen King’s October 2018 release, ELEVATION, goes to writer Richard Matheson, and with good reason. The late Matheson’s early works (I AM LEGEND, HELL HOUSE, THE SHRINKING MAN, etc) were significant influences to the young King, an influence that’s highly evident on the pages of ELEVATION. Fans of Matheson’s THE TWILIGHT ZONE episodes will especially be pleased with ELEVATION for its striking similarities.

In ELEVATION we return to the familiar streets of Castle Rock, seen before of course in CUJO, NEEDFUL THINGS, DEAD ZONE and the current Hulu show of the same name. While there are no cross-over characters in ELEVATION, there are plenty of King “Easter Eggs” throughout which will put a quick smile on the face of die-hard and casual fans alike.

ELEVATION is the story of Scott Carey and his affliction of rapid weight loss. Some may assume this plot is reminiscent of THINNER and while it may seem that way on the surface, you’re in for a surprise. Scott’s sudden and mysterious loss in weight isn’t making him thinner, and he can eat all he wants. The scales register that pounds are vanishing no matter naked or with his pockets loaded with coins. It’s as if helium is steadily filling his body. 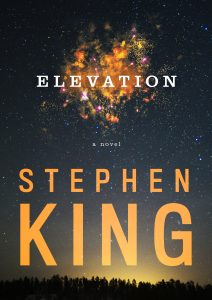 The heart of the story however is in the relationship Scott forms with neighbours Missy and Deirdre, a couple that battle small-town homophobia while trying to keep their local business, a vegetarian Tex-Mex restaurant, alive. At the communities annual Turkey Trot race, Scott’s recent “ailment” causes an unexpected act of the supernatural which changes the course for all of Castle Rock, especially the lives of Missy and Deirdre.

ELEVATION is one of King’s shortest published pieces weighing in at only 144 pages. It’s the quick Halloween read you’ve been waiting for all year that keeps the master storyteller at the top of his game. No spooks here, just a good old fashioned heartwarming story with one hell of a gut puncher of an ending. ELEVATION will have you coming back to it again and again, just like that favourite episode of THE TWILIGHT ZONE.