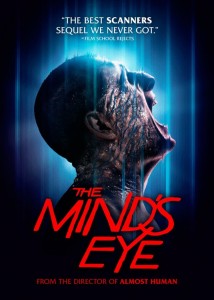 A new poster has been unveiled for The Mind’s Eye and it is electrifying. The quote on the poster claims that the film is the “best Scanners sequel we never got”, which is a pretty strong statement. We caught the film at the beginning of the year and appreciated its homage to action horrors like Scanners and The Fury, additionally enjoying the film’s overall creativity. You can check out our 4-star review here.

The Mind’s Eye comes from director Joe Begos (Almost Human – which I thought was pretty fantastic) and follows a couple with telekinetic powers that must outrun a corrupt doctor who is intent on siphoning their supernatural gifts. You can also read our interview with Joe Begos right here, where he chats about his influences and the plans for his next feature.

Check out the trailer for the film below; it packs a huge punch and flaunts the film’s stunning visual style and relentlessly action-packed pace. This is definitely something that should please fans of David Cronenberg’s gruesome body horror and Brian De Palma’s impressive, mind-bending camera work.

The Mind’s Eye will be released on 5th August.