Electrifying New Poster for Beyond Skyline

The third poster has been unveiled for the sequel Beyond Skyline and it flaunts the 4-star reviews that the film has surprisingly been earning. I don’t think it quite earns 4-star status, but I must admit I had a lot of fun with the film and think it’s a more than worthy follow-up. It improves hugely on the first film and blends sci-fi and martial arts to create a very exciting feature. 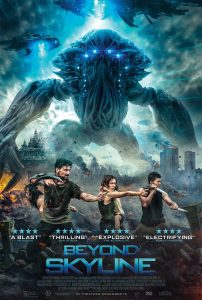 Beyond Skyline follows a detective (Frank Grillo) as he fights to save his captured son from an alien warship. Joining Grillo in the cast are Bojana Novakovich, Iko Uwais, Callan Mulvey, Valentine Payen and Betty Gabirel. The film is directed by Liam O’Donnell, the scribe of 2010’s Skyline.

You can check out our review of Beyond Skyline right here. Be sure to catch the film when it is released on Digital in the UK and US on 15th December, before unleashing on Blu-ray and DVD in the UK on 8th January 2018.