A couple of weeks back, we got our first glimpse of Idris Elba and Matthew McConaughey in full costume as respectively, The Gunslinger and The Man in Black from upcoming Stephen King adaptation The Dark Tower. In those pics however, the actors were just strolling about behind the scenes, whereas now we have our first look at the characters within the Dark Tower world, courtesy of EW. 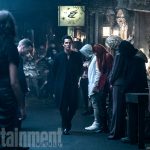 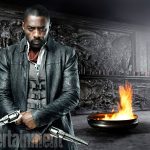 McConaughey talked to the site about The Man in Black, aka Walter O’Dim, saying: “Obviously there are mythical proportions of good and evil in Walter. But we didn’t want to go overly fantastic. That would drop the humanity. So Walter, for me, is a man who exposes hypocrisies.”

The Oscar-winner goes on to say: “You know, he’s not literally the Devil, but I sure as hell think about him like the Devil. I think like the Devil would.”

Gunslinger Roland Deschain roams an Old West-like landscape in search of the dark tower, in the hopes that reaching it will preserve his dying world.

The Dark Tower is currently shooting in South Africa, and is set for release on February 17th, 2017.