WELCOME TO THE BLUMHOUSES’S ‘EVIL EYE’ 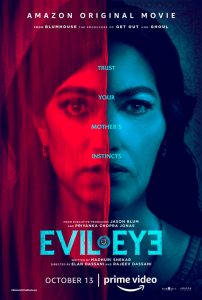 Following last week’s release of the first two standalone films making up the “Welcome to the Blumhouse” anthology, Amazon Prime has now unleashed a further two spine-chilling tales developed with the intention of introducing audiences to culturally diverse stories in the horror, psychological thriller, and paranormal mediums.

One of this week’s releases is the spectral shocker Evil Eye, starring Sarita Choudhury, Sunita Mani, Bernard White and Omar Maskati. A supernatural tale at heart, the film sees a seemingly perfect romance catapult into a nightmare when an overbearing mother becomes convinced her recalcitrant daughter’s new boyfriend is mysteriously connected to her own past. Madhuri Shekar’s script forges much more mileage out of the supernatural premise than most by avoiding timeworn tropes in favour of dissecting such diverse themes as longstanding beliefs and customs, the culture and generation gaps and contemporary public perceptions about mental illness.

With the film now available on Amazon Prime, SCREAM sat down with the identical twin brother-director duo Elan and Rajeev Dassani who discussed exploring deep-seated traditions in genre movies and who had nothing but praise for Blumhouse’s slate of films that champions emerging filmmakers wanting to get their unrepresented stories out there…

SCREAM: Is “The Evil Eye” such a deep-seated superstition as it is depicted in the film?

Rajeev Dassani: It’s pretty common in India but other countries have their own version of it. It’s usually associated with things like jealousy or if you cast the Evil Eye then you’re supposed to not covet. It comes from this idea of a negative energy that you have to protect yourself against.

Elan Dassani: It was very much part of our childhood as well. We grew up being told by our mother to watch out for the Evil Eye. It’s almost like your parents telling you to be respectful and be a good kid or the Evil Eye will mess up your life.

Did the fact that you are identical twins have anything to do with you taking on this project about a person in two different bodies?

RD: I hadn’t thought about it in that exact context but you’re right that there is something about feeling whether or not you’re in the right body or if you are yourself. As twins, our lives have always been linked somehow – even when we’re not in the same place. And in the movie, this man doesn’t understand why he feels a connection to this woman until he does.

ED: At various points in our life, we’ve tried to be divergent but life inevitably always slams us together. We both make movies and we both wanted to be directors. We actually do work well together so I guess this is what we’re doing now (laughs).

The plot allowed you to dissect some of your deep-seated traditions and depict how they are perceived by the younger generation living in America.

RD: The film was actually based on an audio play that was written by Madhuri Shekar. When we talked to Madhuri about it, the play actually came from her own relation with her Mum and she used that to explore the cycle of violence and the cycle of domestic abuse that we see in the film and it was a fascinating way for her to tie the two together.

ED: In terms of traditions and different cultures, what’s so wonderful about this slate of Blumhouse films is that it’s designed to take underrepresented voices and tell unrepresented stories. That sounds like a public service but honestly it’s not. I give Amazon and Blumhouse a lot of credit because I think what they’ve identified is that there is a real hunger for these types of stories. There’s a hunger for well-crafted, commercial genre films but that have a different perspective from the normal. We love that we’re telling this supernatural thriller with violence and cool visuals but within this Indian/American context just because it’s new. People want to understand other cultures but whilst also having a great time at the movies and I hope this is something that continues.

The film shows how people nowadays find it easier to chalk certain beliefs up to mental health problems. How did you approach that aspect of the film to respect these deep-seated beliefs for example?

RD: As long as we were telling a story in which the reactions of the characters felt like the reactions of real people then we felt comfortable with what we were doing. If you take the mother’s husband for example, he is a combination of things. Generally, the men over there are overbearing types of guys but this man is a really nice guy and just trying to do the right thing. He almost doesn’t realise that he’s talking down to his wife. It’s so ingrained in him. He thinks he’s a man of science who works at a university so he feels that he needs to apply his logic to this situation. But at the same time, the mother, who is certain that their daughter really is in danger, does actually need help. She does have PTSD. It’s almost as if she is using religion as a crutch for her own trauma from her past. It’s only when she can come to terms with all of it that she will be able to help her daughter.

ED: Also, on a very basic level, you’re absolutely right that this is tricky because you have to be sensitive and respectful. I think it’s important that as filmmakers we respect the beliefs and religions of our characters and of Hindus even if a character doesn’t necessarily believe in it. Usha’s daughter and husband call her crazy because of her beliefs but we never think of her as crazy. As filmmakers we are always respectful of her beliefs as a character and I think that’s the difference. We’re not saying it. They’re saying it because it’s part of the story.

The dominant and subordinate figures in the couples are very explicit in the film. I’m guessing this was no coincidence?

RD: That was intentional. One reason was to be contrarian in terms of showing that not every relationship is the same. There was definitely the contrast between cultures, but the starting point was just the fact that there tends to be one dominant figure in every relationship. In terms of the contrast between cultures, we usually see it the other way around where the Indian culture has the male figure as the stronger figure and the American figure is the reverse so the contrast is definitely there.

ED: There’s also the aspect of where the mother comes from. She came from a very abusive relationship so we understand the progression from going from this abusive, misogynistic, masculine man to her current husband who is the polar opposite. At the same time, there’s a level to it where he doesn’t protect her when she needs him most. Maybe he needed to be a little stronger there so I think there’s a shame to him because of that.

Covid has thrown everything up in the air but what are your prospects looking like for the near future?

RD: Covid has definitely made things harder. It’s more complicated to do film shoots now. That said, the thing about filmmaking in general is that it’s always been an uphill battle. It doesn’t matter how big or small the film is. It’s a miracle anything gets made and much less anything good. In that sense, we are just continuing to fight for stories that we believe in, to fight for people that we believe in. Honestly, I think this is just the way this business is. If it’s not Covid, it’s a hurricane, you know?

We’re filmmakers who don’t want to be pigeonholed into the same things. Although we tend to love genre stories we like the paths of people like Cary Fukunaga or Denis Villeneuve. These are people who have tried horror and sci-fi and all these different genres but who are commenting on the world. As long as we are doing that in a smart way and trying to say something we could approach any genre really so that’s our general idea right now.

EVIL EYE is one of eight films in the “Welcome to the Blumhouse” series, and is available now on Amazon Prime.