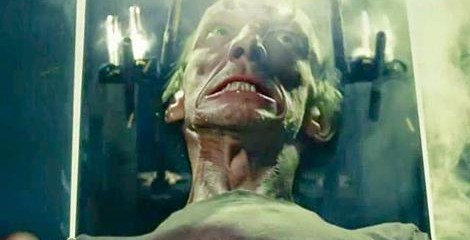 Synopsis:
On the eve of a historic solar storm, two men are forced to survive a terrifying life form that’s hunting them. Meanwhile, an anonymous militia group will stop at nothing to prove to the world that we are never alone in the universe.

From Chad Archibald and Cody Calahan the team behind ANTISOCIAL and THE DROWNSMAN comes EJECTA, an intriguing story from the pen of Tony Burgess (Pontypool). Starring Julian Richings (Man of Steel) and Lisa Houle (Pontypool) Ejecta is an atmospheric but flawed thriller.

Similar in ways to what he did with Pontypool, Tony Burgess takes a minimal approach to his subject matter conveniently leaving a solid foundation for Chad Archibald and co-director Matt Wiele to build on. Together they have worked to maximise on their limited budget in an attempt to deliver an intriguing slow-burning thriller.

Ejecta replaces adrenaline fuelled action sequences with lingering scenes and a creative storytelling technique to develop the story. This is aided creatively through effective sound mixing and building horror through the power of suggestion rather than bombarding audiences with graphic visuals.

Make no mistake, this film will not appeal to everyone and it certainly requires an acquired taste. But I must give credit as this film challenges the audience leaving them to piece the story together. This said, I do have quite a few issues with this film.

Apart from Julian Richings the main performances felt lacklustre and somewhat forced. The effects look incredibly cheap and the brief glimpses of the alien life form looks like it was created by a college student experimenting with visual software for the first time.

Now, I can understand some of the choices made by Archibald and Wiele but there were too many occasions where the film lacked any momentum often feeling uneventful. It’s for this reason that I found it difficult to let this go.

As a fan of Archibald’s earlier work I was really looking forward to watching this film but overall it saddens me to admit just how disappointing this film is.