The Eighth Saw Film is Retitled as Jigsaw; New Logo

Lionsgate has confirmed the eighth edition in the Saw franchise has a brand new title and has released a logo to make things even more permanent. Now to be titled “Jigsaw”, the film has steered away from its original title of Saw: Legacy to focus on the infamous serial killer Jigsaw (Tobin Bell). 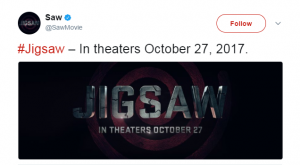 Synopsis:
Bodies are turning up around the city, each having met a uniquely gruesome demise. As the investigation proceeds, evidence points to one man: John Kramer. But how can this be? The man known as Jigsaw has been dead for over a decade. Or has an apprentice picked up the mantle of Jigsaw, perhaps even someone inside the investigation?

It is intriguing to see the film adopt the name of Jigsaw, because he’s been dead in the franchise for quite some time now. We can assume that a new character will be taking up the mantle and fulfilling the role of Jigsaw in a new refreshing way, perhaps to invigorate the franchise which has been lying dormant since Saw 3D’s release back in 2010. Hoping to breathe life into James Wan’s created franchise are Predestination directors Peter and Michael Spierig.

All our questions will be answered and all the mysteries surrounding Jigsaw will hopefully be revealed when the film hits cinemas in the UK on 20th October 2017.