Synopsis:
Director Catherine Sweeney (Nic Lamont) will stop at nothing to get her zombie romantic comedy made, even if it means making the most ridiculous compromises. 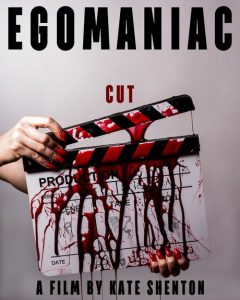 Every now and then a truly special film comes along; one that you can feel has had the director’s heart and soul poured into it. One that puts a massive smile on your face and has you laughing out loud, despite it being inherently quite disheartening. Egomaniac is one of those films and with it Kate Shenton has crafted an insightful, hilarious and brutally honest mockumentary about the ups and downs of independent film-making.

Egomaniac begins where it ends and sees director Catherine Sweeney describing her glee at finally finishing her zombie romantic comedy. From the askew angle the camera is pointing at her face to the intensity in her eyes and her voice, it’s clear that the process has been a tough one. The rest of the film follows her painful journey, which sees her struggling to overcome the most bizarre, but entirely credible, challenges. From financial woes and casting problems, to worries about her own image and the grip she has on reality, Catherine hits every bump in the road that you can imagine. The events play out as an almost satirical prod at the journey one goes through when making a film, but those of you who’ve dabbled in film-making will probably see a lot of harsh reality lying below its comedic surface. The events in Egomaniac boil down to one bubbling warning about “compromise” and the slippery slope you’ll slide down when you start to make drastic changes to a film that should be your baby.

Egomaniac succeeds at drawing you in to Catherine’s story with ease. The events range from the barmy – Catherine being told that she has to include a talking dog in the film – to the humiliating – dressing sexily – and right back round again. It’s a rollercoaster of madness and it’s a brilliant one. It’s a perfectly pitched, truthful exploration of the independent film world that is filled with hate, but never feels scathing.

It’s easy to read the film as a comment on the place women have in the industry, but Egomaniac doesn’t shove the feminist card down its audience’s throat. It would be easy for the film to focus on the role of women, but it prefers to be smarter than that by taking it further. Yes, the film is about the treatment of women and their need to be “sexy” or fit a certain stereotype to be successful, but it is also an in-joke for people in the industry as a whole. Egomaniac has opinions on piracy, 3D film-making and the financial side of film and you can feel the truth bubbling below the film’s fictional surface . Shenton has openly admitted that the film is based on true events – she won’t say exactly what is true, though – but there is a slathering heap of comedy mixed into this harsh clash of fantasy and reality.

As Catherine sinks metaphorically and physically lower and lower into utter desperation her grip on reality starts to dwindle. When it is at its best, Egomaniac is a superbly impressive character study of a woman’s loosening grip on the reality she is so anxious to cling on to. A series of running gags focus on her struggle to remain sane, with scenes flowing between being set in reality and in her mind. In her mind she crafts the ultimate male lead, who becomes her voice of reason and reminder to stick to her original plans; she doesn’t need a talking dog in her zombie romantic comedy, she doesn’t need to sell out to be successful. Does she? Her inner troubles are always coupled with an appropriately comedic gag to take the edge off the sober issues, for example, her imaginary actor throws paper directly at the camera in the attempt to create effects for the 3D moments in her film, but Egomaniac’s sincere and serious intentions always remain clear.  She may not be a serial killer, but there are tonal and thematical similarities between this and 2014’s The Voices; they both tell earnest stories through humour and horror, showing that two very different genres can blend together to construct something that is intelligent, fun and delightfully quirky.

The low-budget, documentary style that Egomaniac adopts reinforces its desire to celebrate indie filmmaking and work as a suitable emphasis on the film’s rejection of big-budget, Hollywood movie making. This is a shameless and necessary dig at the guys – because they’re men, right? – at the top of this chain who drain the creativity out of film and see it as a business purely there for making money. Films are products, rather than works of art. They’re not about heart, vision or artistry, but spectacle and a way to make easy cash. Wrong! Egomaniac wants to remind us that we should follow our dreams and not shy away from them; never compromise, even when all the arrows may be pointing in that direction. It’s a wonderfully positive message that lies in the middle of an overall negative chain of events. It is through its consistently playful tone and deadpan moments of humour that Egomaniac manages to persuade us of its contemplative and honest message; one that we all need reminding of.

A film is nothing without its cast and characters, and Egomaniac has a solid set of actors to bring their characters to life. Leading lady Nic Lamont shines as Catherine, creating a character that is extremely likeable, smart and funny. Opposite her is Adam Rhys-Davies in the role of Catherine’s producer and he is a fundamental cog in the film’s humorous machine. His contradictory advice and phoney image contribute to many of the film’s most successful moments of comedy and it is a joy to watch as Catherine struggles to handle his preposterous behaviour. Every character has been carefully and intelligently written to be suitably exaggerated and hyper-real stereotypes. They further the film’s desire to have fun, propelling Egomaniac forward with a wicked flourish, rather than solely preaching negativities. 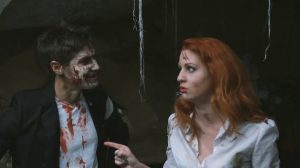 As a consistently well-executed unravelling of escalating events, Egomaniac is an exceptional example of restrained, but thoughtful and important film-making. It deserves to be seen for its intelligent commentary, but also for its satisfyingly mad finale and general hilarity. It may go under-appreciated by those outside the circle of the film world, but for those who are within it will find much to love in this hilariously honest effort.