A new designer drug, Intenze, is on the market. The experience of taking it is called Edging. Unlike any other drugs, Edging gives you a brief but terrifying reality-bending experience, along with an adrenaline rush that can’t be beaten. Taking Intenze is like a watching a horror film while riding a roller coaster. It’s also highly addictive.

There is more to the drug though. The fear it induces opens a doorway for a dark creature, known as The Thirst, to worm its way into the world. The darkness that is The Thirst manipulates an addict to spread Intenze across the small town of New London to all of the unsuspecting public.

The members of the town are a varied bunch and we get to know them before the whole place starts going to hell. I liked the natural way the different members of the community cross paths. It gives it a sense of place. There are a variety of ages as well as gay characters, so it’s not the old trope of bland teens. You do care what happens to them. It makes the insidious spread of Edging even more tense and impactful.

It was interesting to learn about the townspeople’s deep seated neuroses, nightmares, and traumatic childhood experiences that The Thirst manipulated and fed on. As the fear and nightmares spread, The Thirst gains strength and is able to take a tangible form.

The major focus of the book is on one family. Our protagonist is Rick, a devoted father, who works at an elderly care facility. Intenze comes into his life as his already distant and cheating wife, Trish, gets introduced to the drug by her lover, Steven.

Rick and Trish have twins, Timmy and Tammy. They are creepy, with a Village of the Damned vibe, even when interacting with their mother. They have a closeness and an almost telepathic understanding between them. The twins share an obsession with taking apart LEGO people to “fix” them. They have special gifts, but we are never told why. This was frustrating, as they play an integral role. 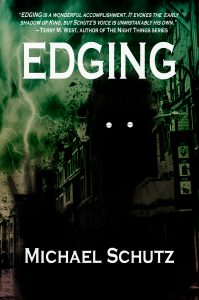 This book offers plenty of nightmarish scares and riffs on Slenderman a good bit. The Thirst is an interesting and powerful villain of the piece. Nightmare hallucinations are a fertile ground for invention and the author uses that well. There is gore and plenty of violence, so the terror is not all just in people’s heads.  There was the potential for humour to drop in with the Freddy Krueger-like nightmare visions, but it doesn’t. The book remains dark and serious, and is all the better for it. It does leave a few questions unanswered, which was a small disappointment. Edging is an enjoyable read and I recommend checking this out.