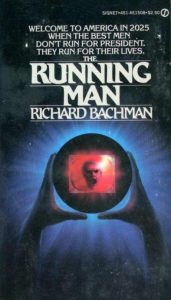 Edgar Wright (Shaun of the Dead, Last Night in Soho) has lined up his next project! The director has been tapped by Paramount to develop and direct a new adaptation of Stephen King’s novel The Running Man.

Published in 1982 under King’s pseudonym Richard Bachman, The Running Man is set in a dystopian future (the far-off world of 2025!) where American has succumbed to totalitarianism. In desperate need of money, protagonist Ben Richards agrees to be a contestant on The Running Man, a brutal game show in which contestants are given a 12-hour head start before being tracked by the “Hunters”—an elite team of hitman employed to kill them.

The Running Man was previously (very loosely) adapted in 1987, with Arnold Schwarzenegger in the role of Richards. Wright’s adaptation is being written by Michael Bacall (Scott Pilgrim vs. the World) and will be a more faithful adaptation of King’s source material. Simon Kinberg, Audrey Chon, and Nira Park will produce.