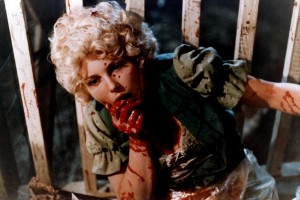 Synopsis:
Deep in a Texan backwater lies the Starlight Hotel, run by the mentally damaged and sexually frustrated Judd (Neville Brand). Not many people stop by the hotel anymore. However, those unfortunate enough to do so, seldom find themselves in a position to check out the next morning. You see, anyone who upsets Judd usually meets an untimely end as food for his pet crocodile which lurks in a swamp at the back of the hotel. And, being the way Judd is, it doesn’t take a lot to upset him or his scaly, reptilian friend

How, you may ask, do you follow up a film like 1974’s The Texas Chainsaw Massacre. Well if you’re the writer / director Tobe Hooper, who was responsible for TCM – now widely considered one of the classic horror films of all time – you attempt to go one better, or in the case of his next film Eaten Alive, one worse.

It’s inevitable that Eaten Alive and TCM will draw comparisons: both films are set in rural Texas, with their main characters mentally deranged, homicidal maniacs – sorry, but there’s really no other way to describe both Judd and Leatherface – whilst the unfortunate cast members are generally both young and obnoxious. Hooper also manages to imbue Eaten Alive with the same general air of depressing seediness which saturated his earlier film, giving it a similarly memorable feeling of griminess and filth.

However, the similarities end there. TCM portrayed its grisly mayhem with a degree of subtlety, with most of the gruesome atrocities taking place off screen – though you think you do, the viewer never actually sees any gore. Eaten Alive, on the other hand, makes no such attempts or pretences. Here every grisly detail and bloody dismemberment is honed in on in loving detail, with some remarkably inventive methods employed by Judd to despatch his victims before they are fed in varying degrees of consciousness to his pet croc. Without spoiling the fun for those readers who have not yet experienced the delights of Judd’s Texan hospitality, suffice to say you will never look at such garden implements as a pitchfork or handheld scythe in the same light again.

A strident weakness of the film, and another main difference between it and TCM, is it’s set bound feel. Where its predecessor used authentic Texan locations for much of its shoot, Eaten Alive was afforded no such luxuries. The whole of the production was filmed on sound-stages at Hollywood’s Raleigh Studios and, though this adds a sense of claustrophobic urgency to many of the set-piece murders, it also kills the sense of reality which made TCM so chilling.

The main highlight of the film – apart from its unrelenting grunginess, if that is your thing – and one of the best reasons for checking it out, is undoubtedly the cast: Hooper somehow managed to persuade a veritable who’s who of past and future cult figures to work for him. Brand, who brings the psychotic Judd to life with a degree of wild abandonment seldom seen in horror movies since, was known mainly for his appearances on television in such hit shows as The Twilight Zone, Bonanza and Kojak, whilst Stuart Whitman who plays the local sheriff went on to feature in such cult shows as Knots Landing and Murder She Wrote. Alongside these two were appearances by Audrey Hepburn’s ex-husband Mel Ferrer – who has the honour in the film of suffering what must rate as one of the most protracted and spectacular deaths in horror cinema – and Carolyn Jones who was Morticia Adams in the original Adams Family TV series, as a wonderfully camp and bitchy brothel owner called Miss Hattie. Perhaps more significant however, is the appearance of two actors who will be remembered forever for the mark they left on the horror genre. Marilyn Burns – who had made such an impact as Sally Hardesty, the sole survivor of TCM – has an equally unpleasant time at the hands of Judd, while the first fifteen minutes of the film belongs to a newcomer called Robert Englund who’s memorable performance as a thoroughly despicable redneck was a virtual dry-run for all the sickos on which he has built his subsequent career.

The campaigner Mary Whitehouse took particular dislike to Eaten Alive during the infamous era of the ‘Video Nasty’ during the early 1980s. However, where most of the films branded with that name seem tame in the light of what’s deemed acceptable today, Eaten Alive is one of the few from the period which still manages to leave the viewer feeling sullied if you manage to watch it through to the end.

Eaten Alive was released by Arrow Video on Blu-Ray and DVD on the 21st September, 2015.