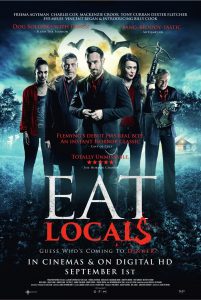 Synopsis:
A group of Vampire overlords meet to discuss the future of their species and the possible acceptance of a new member. However, things get desperately complicated and the simple discussion fast turns into a bloodbath.

Eat Locals is the directorial debut of actor Jason Flemyng (X-Men: First Class, Stonehearst Asylum) and it’s a fast-paced and funny addition to the vampire film canon. Packed full of British wit and an intelligent understanding of the genre, Eat Locals is a must-watch for those who appreciated the humour of New Zealand’s impressive What We Do in the Shadows, but also enjoy the thrill of the chase that can accompany vampire flicks.

The film is quick to set the rules for its monster universe; a world where a vampire clan have guidelines and regulations in place to guarantee their identities remain anonymous, but also, to ensure they feed in the most morally way as possible. Eat Locals is surprisingly thoughtful as Charlie Cox’s once-human Henry offers his thoughts on immigration. He hones in on the important role immigrants play in society, arguing that it would be impossible to kill them without anyone noticing. These politically-driven ideas are woven into Eat Locals’ simple genre guise, raising it above the simply schlocky and funny genre film it could have been.

Don’t worry, this isn’t a particularly politically-charged horror film and the sole concern is certainly to have fun with a familiar genre. The albeit dwindling ensemble cast hold the film together with witty one-liners and consistent comedy that enhances the film’s determination to entertain, rather than educate. Eat Locals succeeds whole-heartedly to be a terrific and laugh-out-loud funny feature, thanks to the chemistry between the vamps played by Charlie Cox, Mackenzie Cook, Eve Myles, and Freema Agyeman. As Peter Boniface, Tony Curran is the stand-out. His dry humour and sarcastic attitude craft a vampire who is never short of brutally honest put-downs. 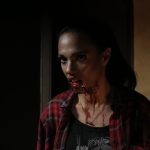 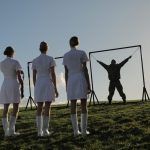 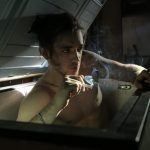 The individuality of each vampire is a real treat and a credit to screenwriter Danny King, who skilfully brings an East End gangster edge to Eat Locals. It becomes a fresh and appealing blend of the crime and vampire genres, which is enhanced when we’re introduced to a group of police officers who are hot on the tails of the vampires. Sadly for them, they have no idea what they’ve got themselves into. Slick cuts between scenes heighten the humour to allow the reactions of characters to do the talking, where officer Larousse’s (Mackenzie Crook) devastated face is coupled with off-screen screams to allow the audience to envision what’s happening when the other officers go charging into the vamps’ cabin, just as they’re about to start snacking on poor Sebastian – played excellently by Essex-born Billy Cook.

Thanks to a fantastic cast and a witty script, as well as confident and stylish direction from Jason Flemyng, Eat Locals is a must-watch indie gem that proves Britain makes some of the best horror-comedies around. It’s bloody hilarious and a joy from beginning to end.