Earth Freezes Over In First Trailer For Zombie Film Extinction 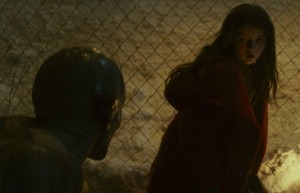 The first official trailer for Miguel Angel Vivas’ (Kidnapped) zombie apocalypse film, Extinction, has been released and it promises a new breed of undead nightmares.

Starring in the film is Lost protagonist Matthew Fox as Patrick, Jeffrey Donovan (Burn Notice) as Jack and Quinn McColgan (Non-Stop) as Jack’s daughter Lu. After escaping the zombies by encasing themselves in a frozen and desolate town, they come under threat once again when the zombies evolve into something much more terrifying.

Extinction will be released in theatres July 31st 2015.

Synopsis:
For nine years Patrick, Jack and Lu have survived the zombie outbreak by isolating themselves in a completely frozen and snow covered town, known as Harmony. It seems they’ve outwitted the creatures, as they’ve disappeared elsewhere, although it seems so have any other survivors. Living in constant fear is taking a serious toll on all three of them. When Patrick goes hunting for food he makes a devastating and fatal discovery – the monsters have evolved and improved into something unimaginable. Will the remaining humans last through the second coming of the dead and decaying?