Thomas S Flowers III. It’s a name you may not be familiar with. I have only read one other thing he has written which was his short story Lanmo in the wonderful anthology, The Black Room Manuscripts from The Sinister Horror Company. I absolutely loved Lanmo. It was one of my favourites in the book so when I got the chance to read Dwelling I jumped at it.

Little did I know that this book would affect me in oh so many ways. 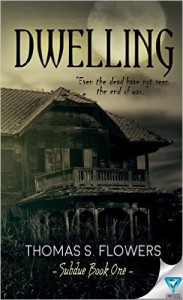 Synopsis:
A group of friends who have been together since their childhood are now adults, with troubles they could never have foreseen when they formed the “Suicide Squad” back in 1995.

With lives affected by war, in so many devastating and different ways, physical and psychological problems are slowly becoming the least of the group’s worries.

Our main characters in this story are five friends, in many ways they are stereotypical of the types of people who would be brought together in a group. This is not a negative. In many respects it is a huge positive because we will all relate to someone within the group.

We have Ricky and Jonathan. They have stuck together through thick and thin and even joined the army together. It’s no secret that Ricky dies and Jonathan is left with the scars from the battle, both physical and psychological. His torment is just beginning. Ricky’s wife Maggie was always left behind when he was overseas. Now she is left behind to pick up the pieces after his death. Again mental torment is her biggest demon. Jake was the quiet one of the group and is now a Presbyterian minister. His demons force him into a life of vice to fill the void his fading faith leaves within his soul. Bobby is on the run, from his friends and from himself. Particularly his “other” self.

This story is a masterclass on character writing. From the very outset you can relate to every single person in this story. Every single one of them is genuine in their makeup and their actions making them some of the most believable characters I have ever read about. Thomas S Flowers has got this part of his writing exactly right. In this Book One of the series, you spend time meeting the characters and getting inside their heads, quite literally. Some of the scenes where the individual characters are searching deep within their minds and souls for answers, are mesmerising. Absolutely stunningly jaw dropping.

One thing I can say with absolute certainty is that the writing in this book is top notch. This is up there with the best in terms of character building and also building the tension and excitement and mystery and intrigue for what is going to happen further into the story.

Jonathan’s part of the story in particular, affected me in a way that, emotionally, I have not felt in a long long time when reading a book. He suffers from PTSD and the early scenes describing the turmoil he is going through within his head are truly amazing. I have to admit to shedding a couple of tears when reading this book early on. I know Mr Flowers served in the military so I can only guess at how much he actually saw and how much of what he saw rears its ugly head in this book but in terms of trying to get across what someone suffering from PTSD has to go through on a daily basis, I think he got this 100% spot on. It’s harrowing to read. It’s horrific.

If it was your intention to highlight the trials of someone with PTSD Mr Flowers then bravo sir. You convinced me of how horrific it must be for people without over sensationalising it to the point where it sounded unbelievable. This aspect of the book should give a lot of people a lot of food for thought. It certainly did for me.

But that’s not all the story is about. It is a horror story after all. Again with this being Book One, it’s all about building things up. It’s all about introducing you to the main players and setting the scene for what is to come. Once again this could not have been done any better.

You know there is evil. You know where it is. You sort of know what it wants. You have no idea how it is going to get there or what its ultimate goal is. Add into this a few sub plots and ghosts running around and seemingly haunting every person in the book, no matter where they are, you have a story that is building perfectly into what is an extremely emotional, chilling and very creepy tale.

This definitely has the potential to turn into a perfect horror story in the truest form of the word. A story that will take a while to come to its conclusion over a few books that I’m sure will keep everyone who reads it gripped to the very end. This is old skool horror writing at its best from a new kid on the block who will definitely take a watching in future.

To summarise: A horror story that has epic written all over it. From emotionally draining scenes of war and post war to surreal scenes of ghosts to super creepy scenes of evil trying to escape its lair. This story has it all. Superb.