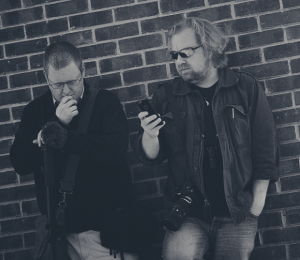 SCREAM’s Jessy Williams recently caught up with Drew Cullingham (Shed of the Dead) to chat about his upcoming feature documentary Haven, which is to be co-directed by Andrew Mackay (The Scared of Death Society).

Drew and Andrew are currently crowdfunding the campaign on IndieGoGo, so they need your help to make it to Haven. “Where’s Haven? Why are they going there?” you ask. Well, quite simply, they don’t entirely know yet. The island is situated off the coast of mainland Britain and the duo are convinced the community are harbouring a terrible secret. Either the island is home to an innocent, elderly community, a group of tax evaders or it’s a home to werewolves, vampires, pirates or witches. Whoever or whatever resides in Haven is the mystery that they are determined to uncover.

Check out our chat below, where we talk about Haven’s shady past, the unsettling lack of young people on the island and the mysteries that surround the only person they’ve made contact with: PC Margaret McLeod. We also become victims to a disconcerting moment of interference, which suggests something strange is certainly lurking around….

SCREAM: For those who haven’t heard about Haven or your campaign, can you tell us a little bit about it?

Drew: We’re hoping to go to this island called Haven which has very little known about it. We stumbled across it and it just seems a little too good to be true. It’s a little community off the coast – and because it’s a bit of a mission to get to and we’re poor film-makers – we thought we’d go on IndieGoGo and see if we can enlist the help of the great public.

SCREAM: What are you hoping to find? You both seem to have very different ideas.

Drew: *laughs* Yeah, we might come to blows over this. Andrew is being very earnest and serious. He think there’s something there in the realm of people evading tax. I don’t see that as a very interesting subject for a documentary. I think it’s too likely that there is something seriously dodgy going on over there and I don’t just mean tax evasion. The few things we know about the island are; there are very few people there under the age of 60 and it’s got a particularly bloody history. I’ve done a few paranormal and ghost-hunting bits in my past, but there’s story of monks being murdered there and pirates getting up to all kinds of shenanigans. I’m going to be putting a couple of extra things in the bag that Andrew doesn’t know about, like infra-red and ultra-violet cameras. I just don’t know, there must be something wrong with these people. I don’t think you can live in that kind of isolation without something being a bit weird. Or there is something otherworldly going on. I’m convinced there is something there of interest to me, and my background is in the horror realm of things. This could be a chance to document some real horror.

SCREAM: Do you find it frustrating that Andrew doesn’t believe that’s what’s going on?

Drew: No, it’s good to have a foil I think. If you let me loose it would just become fantastical nonsense. There’s certain things that I’m expecting to find there, but if he wants to be the voice of reason, that’s probably not the worst thing in the world. I’m sure when he’s staring down the barrel of something weird and wonderful, he’ll become a believer.

SCREAM: What happens when you go there and you discover it is just an island with a few retired people living there innocently?

Drew: What’s the chances of that, come on? I don’t think that’s going to happen. Worst case scenario, we should get some interesting stories about the island’s bloody history. I’m sure there’s some link to that past there. If I have to bust it out with the infra-red cameras and the UV lights and do an all-night vigil by myself, then I’ll do it and I’m pretty sure that I’ll find something. I’m absolutely convinced that there is something going on there.

SCREAM: It’s definitely strange. I tried to do some research of my own and I couldn’t find anything. I did find another island called Haven, but it’s in Maine.

Drew: Well that’s leading towards the New England side of things. I think I may mention the possibility of some witches and stuff. I haven’t heard anything about the history of witchcraft there, but it wouldn’t surprise me, even if it’s some kind of paganism. At the very least, I’m expecting to find some practices and some slight antiquarian approaches.

SCREAM: Do you think elderly people are drawn there, perhaps supernaturally?

Drew: Again, this is something we need to find out. There must have been young people there at some point, so have they all left? If so, why? Is it just because it’s a really beautiful island in the middle of nowhere and it’s really boring? Maybe. Maybe people are moving there to get away from the mainland, but why? It actually makes me question how welcome we’ll be when we go there, because there will be a generational gap. Also, there’s no public transport or boats that go there. We have made contact with the police officer Margaret McLeod who is welcoming us, but just how welcoming is this whole community going to be?

SCREAM: Maybe she’s enticing you to go over there and then you’re going to be greeted by a cult..

Drew: Maybe it’s all a trap, I don’t know what they plan to do to us. She seems a little bit too eager. I’ve made glib comments about human sacrificing, paganism and The Wicker Man, but I’m hoping I don’t end up like Edward Woodward, but you just don’t know. I’m hoping we can handle ourselves pretty well.

SCREAM: Surely someone knows someone over there? It would be weirder if they have no relatives off of the island.

SCREAM: Are you going to pack weapons, garlic and crucifixes?

Drew: I don’t know. As much as I’m open-minded, I don’t know how superstitious I am in terms of remedies to these things. I might make sure I’ve got a sturdy stick or two. *laughs*

SCREAM: Is it normal for an island to only have one police officer?

Drew: I don’t know, I think so. It doesn’t sound like she does a lot of policing. If it’s just a bunch of old retired people eating scones or whatever, what is she policing? If it’s that much of a tight-nit community, there can’t be that much of a justice system. She’s more like a community office. I said to Andrew in my prerogative video that she’s a Christopher Lee character. I can’t see that she’s running around the island catching criminals.

SCREAM: Have you got evidence that proves she is actually a police officer?

Drew: Well, she emailed us. That’s a good point, we should actually check with some kind of police authority. I’m sure she’s sanctioned by the mainland police unless it’s a local sheriff sort of scenario. We should probably do some research, because now I’m a little bit worried. *laughs*

SCREAM: You had a bit of trouble arranging travel to the island, how are you going to get over there?

Drew: I think we’re looking to charter a boat. We really need to get the money for that. I think we’ll be able to get a boat over there with some willing skipper. It sounds like they’ll drop us off and come and collect us in a couple of weeks. So, we might be a little bit stranded there, which is a little bit unnerving. We’re struggling with the financial side of things, so we really need people to head over there and check out the campaign.

SCREAM: Will you still shoot the film if you don’t reach the funding goal?

Drew: We will find a way to, yeah. We have a couple of other avenues to possibly try and raise any money to fill the gap. We’ll try, because I’m sure there’s something worth seeing on this island.

SCREAM: I think it’s important you head over there to expose some secrets.

Drew: Definitely. There is definitely something pulling us over there, but we’re not sure what.

SCREAM: Well it’s definitely a relevant topic, considering the amount going on in the media with tax evasion.

Drew: There’s your bottom line. If nothing else, we get a cutting edge timely documentary about tax evasion. We’d just be selling it to a different market, I guess. That’s nonsense though, there’s going to be weirdness over there. You might not get a chance to interview me later, hopefully I’ll come back. They have Wi-Fi over there, so at the very least, I can email you for help.

SCREAM: I’ve actually got some genuine interference on the line, so I can’t hear you. My webcam is also flashing on and off. What’s going on?!

Drew: Really? Can you make out my words?

Drew: That’s really weird. Andrew actually did a Skype interview with Roger who’s come on-board to produce. We do seem to get a few funny interference things. He’s said nothing about it, but it does seem as though something is messing with us a little bit.

Drew: You just talk about this place and strange thing begin to happen and it’s certainly inspiring me.

SCREAM: How much has Roger found since he’s been digging around?

Drew: Very little. I think we need to go there to find out, so tell your readers to help us! There’s a few perks there, like the opportunity to be a part of the film. We don’t know exactly what we’re going to find, so we have to be vague about these things. One of the things will be a screening, so one of the perks is to go along to the screening and be a part of a focus group. They will then be able to tell us what they think of what we get.

SCREAM: Right, final question. Why should people contribute to this?

Drew: I think there’s a mystery here that needs to be unfolded. Everybody loves a good mystery. It’s topical if you want to go down the tax haven line. Who knows, you might get some footage back of me being horribly killed. Pay for that.

Drew: Other than that, support Indie film and let’s see if we can do something new and different.

Check out the film’s IndieGoGo page here, where you can follow Drew and Andrew’s mysterious journey to Haven.