Can we start using the term ‘legend’ when discussing Drew Barrymore yet? Fuck it, I’m doing it.

Screen legend Drew Barrymore gets a new lease of life when she becomes undead in Netflix’s upcoming original series Santa Clarita Diet. The Crazies’ Timothy Olyphant stars alongside Barrymore, the two playing married realtors Sheila and Joel, who lead routine and somewhat discontented lives in the LA suburb of Santa Clarita. Things get tasty however, when Sheila undergoes a transformation that sees her let go of her social restraints, as well as develop a taste for human flesh. 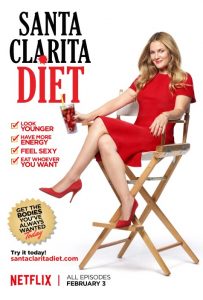 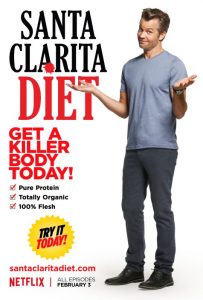 “Sheila comes to life when she becomes undead,” acting legend Barrymore says in the press materials.  “And I wish that without consequences, of course, everybody could experience that kind of liberation, that kind of strength, that kind of terminator vision, that tingly skin that’s like probably laid dormant in you for a while. And not just censoring yourself…what a fun way that is to live”

Olyphant adds: “It’s like any kind of long-term relationship — if your partner goes through some changes and tries to strive for something new, it’s both unsettling and it feels a bit threatening, and you have to sort of take it in. But then you have to decide whether you’re gonna go along for the ride. It’s gonna force you to take a look at the way you see things, the way you operate, and are you willing also to take risks and try to meet the challenge.” 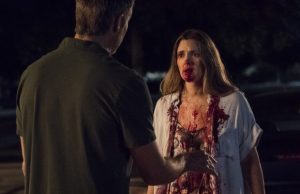 Barrymore and Olyphant of course have a previous horror connection, having starred respectively in Scream and Scream 2.