The plot of Draculas is pretty straightforward in its set up. A rich, elderly, billionaire named Moorecook is dying. Upon hearing of the discovery of a supposed vampire skull in Romania, he buys it and ships it back to the United States. Desperate to live, he plunges the fanged skull’s teeth into his neck. He collapses and is rushed to the local emergency room, a rural hospital in a small town. The craziness begins as he wakes up and the vampirism spreads like wildfire. We have a hospital filled with “draculas” and a cast of characters trying to stay alive.

The main lead characters are Clay, a gun obsessed sheriff’s deputy, Randall, a recovering alcoholic lumberjack, and his ex-wife and nurse, Jenny. There are multiple other characters fighting for survival, but these are the main protagonists. The draculas, for the most part, are not mindless creatures running around. There are some like that, but the authors make a fair few of them into characters in their own right. You get to hear their inner monologues – like the little girl, Oasis, who wants everyone to share their “red candy” with her.  Unquestionably, my favorite of these was Benny the Clown. A vampiric clown immediately conjures some images in your head, but after following the appearances of Benny the writers do so much more with him. He was dark, funny and above all fantastically entertaining. I kept waiting for his next appearance. There was a great deal of creativity put into the draculas and giving them individual characteristics and traits. The main villain of the piece, aside from the original dracula, Moorecook , is Dr. Lanz, an arrogant obnoxious surgeon who maintains more of his cunning after being turned and uses it to his advantage.

There are some genuinely creepy moments, especially with vampire children and Jenny desperately trying to protect the pediatric ward from the hungry vamps. Not to mention expectant mother Stacie, who picked the worst time ever to go into labor. Throughout the book there is tons of gore. Not only do the draculas rip people to shreds, but they’ll also happily eat each other and even themselves. It gives new meaning to finger food. These are not the Twilight vampires, and they don’t just have little fangs, but have completely different shaped skulls and teeth that rip through their old faces. The book is dripping in blood, body parts and splatter. The gruesome action is nearly constant throughout the book and there is plenty of black humour.  As the entire book is set in the hospital as a series of cat and mouse scenes between the draculas and the uninfected, it does drag towards the end, and my interest waned. It could have been a bit shorter or had some more variety to the setting and action. 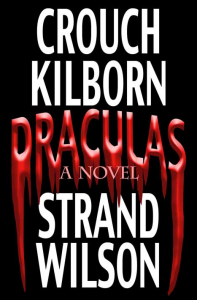 As you can see by the enormous title of this blog post, it’s a collaboration between four authors.  You might think this would be jarring when it’s a continuous story being shared between authors, but I found it completely seamless. I’m not sure how they divided it up. The eBook contains lots more material beyond the main story itself. It’s like getting Blu-ray extras, deleted scenes, alternate endings, author interviews and some additional shorts. Overall a fun read that I recommend, but it could have done with a little something extra.