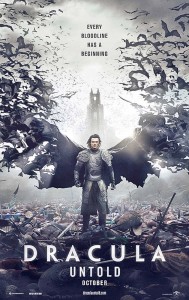 Synopsis:
Facing threats to his kingdom and his family, Vlad Tepes makes a deal with dangerous supernatural forces – whilst trying to avoid succumbing to the darkness himself.

There have been many takes on Bram Stoker’s most notable novel; Dracula, but first time feature director Gary Shore tells the tale of how and why he became the monster, instead of following the narrative from the book. Starring Luke Evans in the title role, with Charles Dance and Dominic Cooper in supporting roles, they make Dracula Untold an origin story you won’t want to miss.

The film starts out with an opening sequence narrated by the son of Vlad the Impaler, whilst Shore introduces his dynamic visual style. The short montage tells the tale of how his father became the legendary Dracula. As a young boy, Vlad’s father gave him away to the Turks to be raised alongside Sultan Mehmet, as a token of affiliation. Vlad soon becomes notorious and gains the name “The Impaler”, after using huge wooden stakes to make a spectacle out of those he killed. He manages to leave the Ottoman Empire and becomes Prince of Transylvania, living happily alongside his wife Mirena (Sarah Gadon) and son, Ingeras (Art Parkinson). That is until Sultan Mehmet and the Turks storm into his castle and demands 1,000 young boys to be trained up and join their army, including his very own son. Of course he refuses and desperately seeks help. This is where he meets up with the vicious, cave-dwelling vampire in which he strikes up a deal that gives him supreme power for three days. Being a vampire however`, there is one catch that comes with the arrangement; he will be tempted to drink human blood, and if he does, he will stay as a vampire for all eternity, if he resists, then all will go back to normal.

The most noticeable aspect of the film is that the style is incredibly similar to that in Game of Thrones. Like, really, really similar. It probably didn’t help that two of the central characters were in the show itself. I don’t usually like to compare things, but the similarities were just too strong for me to ignore. Shore definitely spent too much time making sure that the visuals looked pretty and not enough time on the story, such as not making it clear if silver is actually a vampire’s mortal enemy, or if the sunlight will kill one. However, I don‘t particular think that the film’s faults lie entirely with Shore, I think It’s down to bad writing too. Too much time was spent making sure that we would feel sympathetic for Vlad, instead of the monster he is supposed to be. Unlike other interpretations of Dracula, we see a more human and emotional side to him. Trying to humanise the dark character is an interesting development, and a one we’ve recently seen in Maleficent, but this one just isn’t as good. It’s just not right seeing the most feared vampire in the world being a loving husband and father. Thankfully, Luke Evans was brilliant throughout the film; he portrayed the lead role seamlessly and was utterly engaging to watch.

The ending of this film is definitely setting up it up for a sequel, or the rumoured Universal monster crossover film. We see Vlad in the present day meeting a woman named Mina, then hitting it off by reciting her favourite piece of poetry. The two leave together and then it cuts to Charles Dance’s character who utters the same words he said just before he turned him into a vampire; “Let the games begin”. I think it’s pretty safe to say that this short section of the film was more interesting than the previous 85 minutes of it. It’s just so exciting to imagine the whole Universal monster universe set in the present day and interacting with one another. Even though this film has been a critical flop, I hope that its box office results were high enough to make the studio want to make the crossover film.

On the whole, it’s an alright film experience, probably more rousing for those who are fans of the Thrones series. It does give a good history on the character of Dracula, and it was great to see Vlad turn into the monster. It’s just a shame that it wasn’t more horrifying, but I suppose that’s what you get when you make a monster film and have it rated 15. The only particular ‘scary’ bits were those including Dance’s vampire in the cave, but they were very short lived. I was expecting a whole lot of blood and guts in this film, especially with there being so many battle scenes, but it didn’t even get close to how much of it I wanted. But at least it’s not another remake.