Doug Bradley on the Abandoned Michael Myers vs. Pinhead Film

With Bruce Campbell recently having talked about why Freddy vs. Jason vs. Ash will likely never happen, Hellraiser star Doug Bradley has opened up about the Halloween/Hellraiser crossover that never was.

Michael Myers vs. Pinhead was looking like something which might actually happen back in the early 2000s, before 2004’s AVP and its 2007 sequel swiftly scared studios (and indeed fans) off the idea of horror showdowns for good.

Talking to Your Move Magazine, Bradley reveals Dimension’s ill-judged reasons behind not moving ahead with the film.

“I was told that the year before Freddy vs Jason was released, Dimension Films rejected two scripts for a Hellraiser-Halloween crossover, which was obviously where they would go because they owned both franchises,” the horror icon said. “I was told the reason they turned it down is because they didn’t think it would work. They predicted that Freddy vs. Jason would bomb, but it opened at the top of the box office and stayed there for a second weekend – I think I’m right in saying that it was the first movie that year to do so.”

Bradley went on to explain how Freddy vs. Jason’s success caused a turnaround at Dimension, revealing some interested parties that could have made it something truly special.

“After [Freddy vs. Jason’s] success, Dimension wanted a Hellraiser-Halloween movie made immediately, so it was certainly going ahead. I had a couple of phone conversations with Clive [Barker] about it and I was getting quietly excited. Clive said he would write it and I heard reports John Carpenter would direct.” 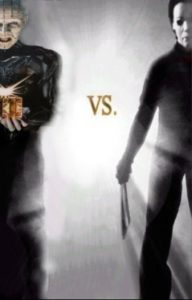 Now that hurts. Can you imagine the splash the film would have made with such names attached? Alas, the film never was however, and Bradley tells why.

“The version of events I got back on this is that the Akkad brothers, who produced Halloween, retained control of the sequels and didn’t want the crossover to be made. I guess they didn’t want Michael Myers hanging around with the likes of Pinhead.”

Another contributing factor could have been a poll that was taken among horror fans around the time to determine whether the crossover was something they’d want to see. Bizarrely, the overwhelming response was negative. With the current trend of bringing horror icons back to the screen in their numbers, it’s hard to think the same would happen now, although if 2016 has taught us anything, it’s that the voting public are absolutely not to be trusted, at any cost.