Synopsis:
Determined to lose his virginity before his 30th birthday, Jim (Danny Morgan) thinks he’s hit the jackpot when he meets sisters Lulu (Georgia Groome) and Kitty (Kelly Wenham). However when he and his confident friend Alex (Michael Socha) head out with the girls, they realise that they’re hiding a dark and deadly secret. 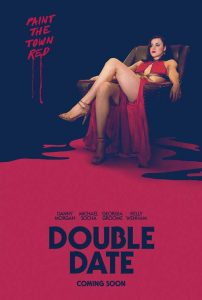 Comedy-horror films tend to be a bit hit-or-miss and it pleases me greatly to say that Double Date is a sure-fire hit. Danny Morgan – who is the film’s star and script writer – has written a genuinely funny horror story that wonderfully dips between being very silly and rather gruesome.

Audiences will be glad to know that despite the film’s concept that suggests a typically rude and crude tale of two dudes trying to get laid, Double Date is more concerned with crafting honest laughs. Sure, there are jokes surrounding the 29-year old’s virginity, but it’s refreshing not to see a film like this focus on a couple of 18-year olds livin’ it up in Magaluf. Instead, we have class actors Danny Morgan and Michael Socha, who burst with equal amounts of credibility and hilarity. The chemistry the pair have on-screen is a joy to watch and you’ll lose count of the amount of laugh-out-loud moments the pair help to deliver.

From a scene involving a strange electro band called Krabs, a bizarre and slightly terrifying birthday celebration and a cameo from Dexter Fletcher, Double Date flows from scene to scene confidently, but always surprisingly. You might think you’ve seen it all when it comes to devious femme fatales looking for their next male victim, but I assure you that Double Date’s offers plenty of unexpected amusements that are sure to delight.

The film definitely leans more into the comedy side of things, but it does carefully tread that line between hilarity and horror, because the humour verges on the bizarre, crazy and almost uncomfortable. There is a definite sinister edge coating the film to remind us that we are undoubtedly watching a horror film, so for every laugh do expect a gasp to follow shortly behind. One particular stand-out scene follows Alex in an intense battle with Kitty, which becomes a fine example of the films’ comfortable balance between action-horror and pure humour. It’s a wonderfully funny scene that doesn’t skimp on the laughs, but there’s a generous dash of brutal violence to emphasise that dark thread that runs through Double Date like a bloody stream.

Lulu and Kitty desire to paint the town red with blood, sadly for Jim and Alex. It’s a treat for audiences to see these ladies dish out pain-a-plenty in scenes that are excellently and realistically choreographed to ensure we feel the men’s’ pain, too. There’s a ton of bloodshed that will leave the faint-of-heart feeling queasy, but Groome and Wenham’s seductive personas are what’s truly effective. Groome’s Lulu is a little softer round the edges, but Wenham’s Kitty knows no limits and will never hesitate to get her claws out. They make for a great pair, where each is to the other like yin is to yang; seemingly opposite, but coming together for their shared intentions. 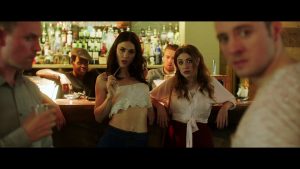 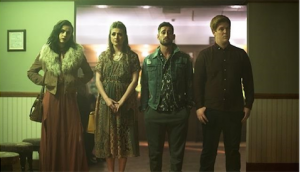 Their characters are not quite a feminist’s dream however, as you’ll soon learn that their purpose is only somewhat understandable. They’re out for themselves and, damn right, they should be, but don’t expect to be rooting for them both for the entirety of the runtime. This is only another note of appreciation for this film’s intent to be more than simple, and the complication of their characters adds another impressive layer to Double Date’s plot. It’ll keep you guessing until the end, even if some of the later decisions are a tad predictable, but Double Date’s entertainment value can never be denied.

As well as offering humour and horror galore, Double Date has a slick soundtrack to accompany its visual treats. From Blue Daisy’s Gravediggers; a twisted dose of upbeat indie, to the mellow Virile by The Blaze, the soundtrack is packed full of variety, emphasising the film’s refusal to commit to any one style or genre. It’s a terrific blend of beats and rhythms that combine to craft a film that is creatively unpredictable.

Double Date is a hugely pleasant slice of British comedy-horror that excels thanks to the pitch perfect performances from its cast and a script that brilliantly blends both horror and humour. It’s rare to find a film that is, honestly, very funny but Double Date 100% is one of the funniest horror films since Shaun of the Dead.