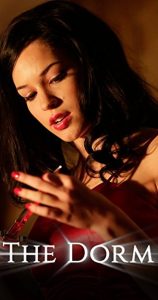 Horror films have always been fascinated with the fears and anxieties that are associated with being a teenager. Sudden changes in mood and appearance, as well as mounting social pressures, are all useful metaphors through which many horror tropes can be explored, examining the uncertainties that we all face at such a transitory phase in our lives. The Dorm – a film that premiered on MTV back in 2014 – merges these fears with ritual sacrifices and Palaeolithic magic, and while it has some good ideas, the film ultimately has nothing interesting to say, descending into clichés and stereotypes as the movie progresses.

Vivan (Alexis Knapp) has been accepted to a new college mid-semester. She is painfully shy, overweight and taking heavy doses of anti-depressants after a failed attempt to kill herself. When she meets Sarah (Cassie Steele), Vivian is drawn into an outgoing circle of new friends, all of whom attempt to bring Vivian out of her shell. Everything seems to be going great at college, but when Vivian discovers that her friends have an interest in ancient mythologies and prehistoric death rituals, her life swiftly starts to unravel. It isn’t long before Vivian’s body begins to change; she starts to hear voices and exhibits signs of a personality disorder, but can she stop Sarah and her friends before it’s too late?

One of the worst things about The Dorm is just how terrible the script is. Besides Vivian and Sarah, the characters are all flat and one-dimensional, and there is nothing nuanced or believable about anyone that Vivian meets. In addition to this, the dialogue is ridiculously overwrought, filled with long exchanges that exist for no other reason than to provide unnecessary exposition. When Vivian’s sister asks if she is still taking her meds, Vivian replies, “Who are you – my dead mother or my absent father?” This would be a questionable line in any context, but the fact that Vivian says it to her sister is largely unforgivable. Similarly, the acting is dreadful throughout, particularly in the supporting members of the cast. Jen, for example, is so wooden that her death comes as a huge relief to the audience; we realise, thankfully, that we won’t have to watch her stumble through any more scenes. 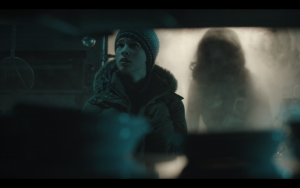 The magical element is interesting, and the ideas of animism and albinism have largely gone unexplored in this type of horror. Unfortunately, writer Sean Hood has no idea what to do with these elements, macerating them down into a jumbled, meaningless mess. Although it is clearly expressed that the death rituals were historically used to promote strength and beauty in those performing them, the ‘twist’ at the end renders these rituals unintelligible, veering instead into some half-baked ideas about possession and resurrection.

On top of this, Hood’s script contains enormous plot holes, and most of the characters make decisions that don’t make any logical sense – even for a horror film. Sarah and her friends (all of whom are actively practising Palaeolithic magic) invite Vivian to their class on ancient mythologies, even though they have no intention of getting her to join them. In fact, when the plot is revealed at the end of the film, it makes no sense at all as to why they would ever do such a thing – except to lazily introduce the audience to the magical themes. In the same way, when the final ‘villain’ reveals their plans for Vivian, the plot becomes so devoid of meaning that it’s hard not to think that Hood simply had no idea how to tie up the story.

The Dorm has some interesting themes and ideas, but the terrible script and jumbled plot make it a fairly mediocre experience to actually watch. The annoying thing is that it does have potential to genuinely break new ground, especially by exploring the links between puberty and depression, or the correlation between depression and madness. Of course, these ideas get ditched for something altogether more ridiculous as the film progresses, and the unique set-up soon devolves into a series of predictable teen clichés. If you’re looking for a film to drunkenly make fun of with some friends, you can do worse than watch The Dorm, but if you want to go into this sober, well, don’t say I didn’t warn you.