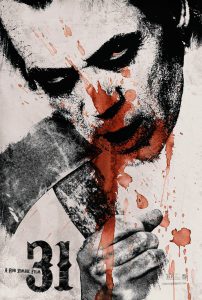 Ahead of its September release, another new poster has dropped for Rob Zombie’s 31. It shows Richard Brake as ‘Doom-Head’, who Zombie says “…runs a perfect game of death and misery.”

31 follows five carnival workers who are kidnapped and held captive in a nightmarish factory compound where they are forced to fight for survival against a group of psychotic clowns. It stars Zombie regulars Malcolm McDowell and Sheri Moon Zombie, and sees the director reteaming with Lords of Salem’s Meg Foster and Jeff Daniel Phillips.

Getting 31 to release has not been plain sailing for Zombie, with the film twice having been branded with the dreaded NC-17 rating in the US, and only reduced to an R after a number of cuts. Zombie assures us however, that the uncut version will see the light of day at some point.

31’s UK premiere will take place at London’s Frightfest on 28th August. It will be available on VOD from September 16th, followed by a limited US theatrical run from October 21st, through Saban Films.