Last month we brought you news of Intrepid Pictures’ latest horror The Bye Bye Man, which now has its first official trailer. The film will be unleashed on US cinemas on June 3rd, released by STX who have recently put out The Gift, The Boy and Hardcore Henry. 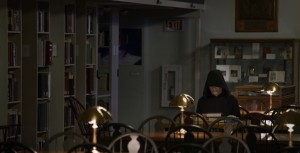 Set in 1990s Wisconsin, when three college students move into an old house off campus they unwittingly unleash a supernatural entity known as The Bye Bye Man, who comes to prey upon them once they discover his name.

The friends must try to save each other, all the while keeping The Bye Bye Man’s existence a secret to save others from the same deadly fate.

Stacy Title (Let The Devil Wear Black, Hood of Horror) directs The Bye Bye Man, which is based on a short story entitled The Bridge to Body Island, by Robert Damon Schneck. Check out the trailer below; it’s a doozy.