The first teaser poster for Alien: Covenant has landed and it’s freaking wonderful. It’s simple, scary and bold, bearing an extreme resemblance to the original Alien poster from 1978. Instead of an ominous glowing egg, we have a slimy Xenomorph which looks absolutely terrifying. The ominous tagline reads “Run”, but all we want to do is grab this poster, frame it and put it on the wall. 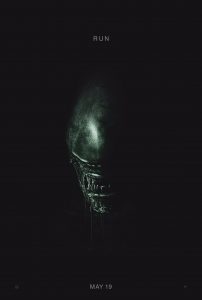 Bound for a remote planet on the far side of the galaxy, the crew of the colony ship Covenant discovers what they think is an uncharted paradise, but is actually a dark, dangerous world — whose sole inhabitant is the “synthetic” David (Michael Fassbender), survivor of the doomed Prometheus expedition.

There has also been a change of release date for the Prometheus sequel/Alien prequel, with the film originally planning to be released in August 2017. However, now it has a release date set for 19th May 2017, so we’re getting it 3 months earlier – hooray! This means that Alien: Covenant will be released alongside Annabelle 2, so it’s a real battle of horror at the box office, but who will come out triumphant; a spooky doll or the iconic Xenopmorph? We know who our money’s on.