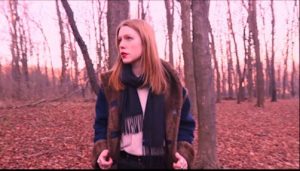 Don’t Let the Devil In is the first full-length feature from emerging filmmaker Courtney Fathom Sell and recently featured on Facet.org’s Resident Video series, which provides exclusive access to films from rising indie talents.  Described as a film about “the evil we experience everyday’’, it examines the subject matter from various angles, including humane, political and occult, to create a serviceable mystery thriller that’ll go down well with fans who like their horror steeped in ambiguity.

The film follows land developer John (Marc Slanger) and Samantha (Jordan Lewis), a married couple who relocate from the big city to rural Maryland for a change of scenery while they overcome the loss of their child.  When John is told by his boss he can keep his job when he moves away as he’ll be overseeing a casino project, it all seems too good to be true – even though he’s warned that he’ll face some resentment from the townsfolk.  But upon arrival they suspect that this is no ordinary town as the locals don’t exactly welcome them with open arms and small town hospitality, and it doesn’t take long before they’re subjected to their harassment – and more.

City slickers invading rural regions is a cornerstone of genre cinema.   When done right it’s effective horror as the idea of being outwith the safety of our comfort zones is a fear most of us can relate to.  Don’t Let the Devil In doesn’t quite get under the skin like many of the great rural horror films throughout the years, but it boasts and unsettling score and disconcerting colour schemes which give it a nightmarish quality from time to time.

That said, some of the performances are hokey, but that’s commonplace in indie films and should not deter from their accomplishments.  Given the limited resources available, Don’t Let the Devil In looks professional.  Credit must be given to director Courtney Fathom Sell for stretching his bucks and crafting a well-made and well-shot film with some eye-catching cinematography.

What does make Don’t Let the Devil In effective is its thought provoking political subtext pertaining to mandatory evacuations, gun control, and corporate expansion in small towns.  In Maryland, where the film is set, it’s a considered a criminal offence to disobey a mandatory evacuation order; John’s job requires him to oversee development in the area, which in turn requires him to force people from their homes much to their displeasure.  The film, therefore, can be viewed as a commentary on the injustices experienced by rural areas at the hands of political and corporate entities who don’t have their best interests at heart. 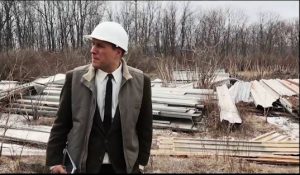 Overall, Don’t Let the Devil In is a moody slice of small town paranoia with political undertones that might give some viewers something to ponder, even if it won’t necessarily leave their spine tingling. But its mystery is engaging enough to maintain interest until the end and it’ll undoubtedly please fans of horror fare pertaining to cults and bizarre communities.

The film can be watched for free over at Facet.org.