Synopsis:
If you go down to the woods today, you’re sure of a big surprise…. Damn straight you are if you are talking about James Bryan’s DON’T GO IN THE WOODS… ALONE! because for his bunch of happy campers things are about to go off the deep end when they find themselves targeted by a feral, machete wielding, hillbilly gone wild. As our bunch of intrepid explorers get picked off one by one, and the blood and guts start to fly, it’s up to duo Peter(Jack McClelland)  and Ingrid  (Mary Gail Artz) to try and save the day. That’s if they can live long enough to escape the pursuit of the mysterious killer who acts like Grizzly Adam’s psychotic cousin.

Former video nasty DON’T GO IN THE WOODS… ALONE! hits its UK BD debut via 88 Films in all its uncut gory glory. This release comes as part of the ongoing 88 Films Slasher Classics line. One of the infamous 72 banned films targeted by the DPP list, the film stands as testament to how uneven the banning was. By today’s standards the film is hardly shocking. While it does shovel out the violence, and plenty of sticky grue too, the film is so comical in its ineptitude- not to mention lacks any sex or nudity- that it hardly stands out as being some forerunner in horrific filth for its day. When you place it in context of its time and place, many other films of the period were pushing the envelope a lot further than this. There were a few of these (unconnected) “Don’t” films- DON’T LOOK IN THE BASEMENT, DON’T GO IN THE HOUSE, DON’T GO NEAR THE PARK for example- the titles representing in essence a kind of Tesco value situation in terms of content; with the obvious happening for those who ignore the tagline. On that level DON’T GO IN THE WOODS…ALONE! never fails to live up to expectation.It’s difficult to talk about a film that essentially has little in the way of plot. This isn’t some art film leaving out coherence to provide something chocked with symbolism or raw surrealist satire either. It is what it is, a bunch of unrelated random people walking around in woodland, and then getting killed. There is even an errant lone man in a wheelchair floating around in what appears to be an ode to TCM’s Franklin.  Even more difficult is trying to convey how much fun Bryan actually makes of this simple foundation. We have a crazed killer who looks like he has escaped from the extras of MAD MAX 2 running around (and he isn’t very fit, so puffing around to be more honest) hacking people to pieces and roaring for no apparent reason. It’s great. The blood runs free, and there is a gleeful aspect to this that seems missing in the ultra-realistic modern age of torture porn. No one can act, but we don’t care, it just seems to make everything even more enjoyable and absurd.While the film wasn’t breaking any new ground in terms of ‘plot’, one thing you have to appreciate is its cheap and cheerful modus operandi wasn’t as easy to achieve in its day as it might appear. Overall the film plays out like a rough and ready SOV (Shot on Video) low-budget independent like BLOOD CULT (1985) or VIDEO VIOLENCE (1987) and its ilk. But these films came along a lot later, and were indeed assembled together on video cameras, with the help of family and friends- encapsulating the spirit of true independence that reclaimed horror back from major studios. DON’T GO IN THE WOODS… ALONE! was made in a time where everything was shot on 35mm, so there’s quite an effort to make something that achieves the feeling of being made for peanuts when actual camera equipment is involved- the film even has a DP (Director of Photography), but still manages to retain the look and feel of something made by college kids. Somewhere underneath all this there is a feeling of goodwill or real heart evident that makes certain things forgivable, while it is obvious quite an effort has gone into trying to make it as gratifying as possible when it comes to the gore. Then of course there is a great headcount to consider, body after body is racked up one after the other; with highlights including a slow garrotting by machete, gore piñata via victim in a sleeping bag, and death by swinging snare trap to the face.

There isn’t really much more to say about this tasty little ludicrous gem from the DPP list. If you are expecting realism, acting or plot, you would be best off going somewhere else. But for an example of some perfect mindless retro fun, and one of the more light-hearted examples of a video nasty, you could do a lot worse than this. The upgrade to BD by 88 Films makes the film look like it was (almost) made yesterday- the print is about as flawless as it can get; slight instances of dust and crackle appears from time to time, but nothing major. If it wasn’t for those terrible vintage fashions, it would be easy to mistake it for a modern day Chris Seaver film; without the obvious goofball elements and with some added breathtaking woodland/mountain scenery that shines in the medium of high definition. While the “making of” documentary provided in the extras is just as entertaining as the main feature. Director Bryan assembles his cast and crew to talk about the film they made many years ago- which they do with a certain amount of obvious enthusiasm and pride. Each segment appears to be delivered with a dead pan element of wry comedy, and you really get a feel for the love behind the film from those who made it.

The disc comes with the following specs and extras: 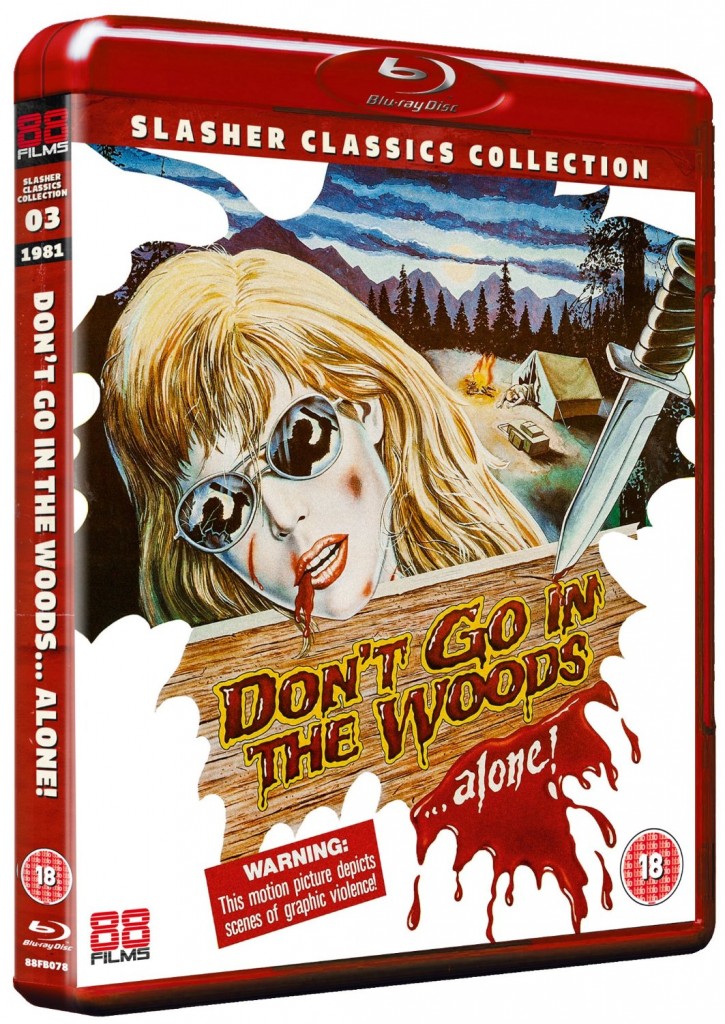