Don’t Blink, It’s a Teaser and Poster for the Short Film Commune 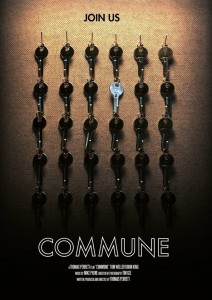 A tense new teaser has been released for the short horror film titled Commune and it’s quite skin-prickling. A very slow zoom-out of a door way with a flickering light is a gateway to the horror that you’ll have to be vigilant to catch.

Synopsis:
A man takes a job as the guardian of a rundown London house. Charged with keeping the property secure, he soon realises that it’s not the building that needs protecting, but himself. A malevolent dark cult from the past, resides within the building and they are hunting for new members, stopping at nothing to make you, join them.

We’re huge fans of the poster’s design and ominous tagline that reads: Join Us. Sometimes, being simple is the best way to be and this poster proves that a lot of terror and intrigue can be drummed up within the single image of a glowing key.

Commune comes from writer-director Thomas Perrett (The Forgotten) and stars Robin King and Tom Weller. At the moment, the film is currently looking to secure a few festival dates, so keep an eye on their Facebook page to keep up with announcements.

COMMUNE_TRAIL from Tom Perrett on Vimeo.