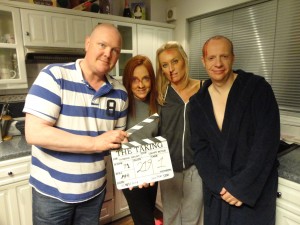 Although Dominic Brunt has appeared in over 1200 episodes of Emmerdale as Paddy, you may start to recognise him as a horror director. After his debut feature, Before Dawn, where fast-paced zombies are introduced during a dramatic moment, Dominic returns with a horror film a lot closer to home. Debt is something that a lot of people can relate to and when debt is actualised into a terrifying loan shark who will do whatever to get his money.

Before Dominic Brunt’s sophomore feature premieres at FrightFest, Ashley Norris got a chance to discuss the film in-depth with the director to learn more about how the film came to him, New French Extremism and if the film is an allegory…

SCREAM: How did the script come to you and what made you then progress with it?

Dominic Brunt: The story was researched over quite some time. We looked at lots of news stories about loan sharks in recent history and there were a few stand out cases in this country and a couple in Poland and Indonesia. They’ve been around since money was invented obviously. The shocking thing is how successful and ruthless these people are. They are absolutely brilliant at what they do but in a terrible and pitiless way. The British individual which our character of Jeremy is based, was literally making millions of pounds from hundreds of people.

No matter how far we went with the story, real life would have something far worse to offer. I’ve been in debt and I found it to be one of the scariest and most unsettling times in my life. A good horror film might keep me awake for a few hours but being in debt made me into a gibbering insomniac. Paul Roundell made the structure and characters into a great screenplay which Metronome picked up in Cannes.

The film is conversationalist, a lot relies on the characters talking, especially Victoria Smurfit’s character. There’s even a little West Wing/Scorsese style tracking shot. What inspired this tone and that shot particularly?

Well Paul’s dialogue is really quick and naturally chatty. He manages to squeeze lots of exposition and plot into seemingly everyday talk without you noticing. You think you are enjoying people taking the piss out of each other but the information is being passed along to the viewer in a subtle, cleaver way. I like the speed at which Bex and Dawn talk in Bait. The whole thing zooms along at a right old pace which is vital for a thriller.

The long tracking shot was done in about seven takes to get it right after multiple rehearsals through and out of Todmorden Market. I’m very proud of that. I do have Geoff Boyle to thank for a massive lighting job and John Taylor for heaving a Steadicam around for hours.

There is an air of menace all the way through the film, it lingers keeping the audience on its toes. It’s not directly horror always. Did you have any influences for the film’s atmosphere or any that influenced you perhaps?

The script isn’t horror but the film is executed absolutely as a horror. The only difference to me was that the monsters were people. Keeping the tension creeping along throughout was important. The screw needed to be constantly tightening before the finale which sees a huge set piece unfurl and revenge exacted.

Influences are from everywhere. I do love Ken Loach but I also watch lots and lots of horror films and thrillers. I’d like to think that Bait is natural in pace and quality but then when events take a turn towards the worst case scenario, we then follow pure thriller/horror.

The third act, without giving too much away, feels like a New French Extremism film Inside particularly comes to mind – was this intentional?

Well if you follow horror films, you can’t ignore the French and films like Martyrs were genre defining. I also think that if you’re going to make horror or elements of it then you really can’t do it by halves. There’s a million ways to kill a monster. Pick a good one and go for it. 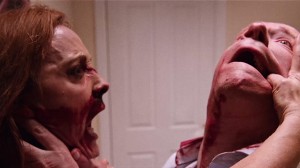 Your lead actresses really pull off all the fear and all the comedy that they have. What made you settle on them?

Joanne and Victoria (Bex and Dawn) know each other from drama school and are best friends in real life. There was already love in the relationship which didn’t need bringing out with rehearsals. There was no contrivance in the warmth and care that the characters have for each other. Both Jo and Vicky threw themselves into an incredibly arduous shoot with a sense of humour and massive amounts of energy and good will.

There is an autistic character in the film. Were you concerned of representing autism?

We have autism in our family. The character of Ethan exists in their world and Dawn deals with it as a single mother. We make no sentimental comment on autism at all in the film. There just so happens to be one boy who lives with it. Dawn would like a better life for him.

I like the fact that in Emmerdale we have a boy with Down Syndrome who exists in that world but with no Down Syndrome stories attached. Really inspirational. I just think there should be more of that.

My parents are psychiatric nurses and people with mental handicaps and illnesses were kept away from society in the past. Things are thankfully different now and in a tiny way, we are reflecting that.

Jonathan Slinger had a character that must be a cathartic dream. Were you ever scared of him on set?

Jonathan Slinger is a pussy cat but fortunately for us, he is also a ferociously intelligent actor. He spent ten years at the RSC playing all the main characters for them. We grabbed him as he left for London. I’d seen him in all sorts over the years and was always blown away by what he could do. A director’s dream.

The gore in this induces a lot of wincing and, for some, dry-heaving. Why did you decide to go full-hog with it?

There’s no point in getting the audience into a state of hatred for the “monster” then quickly shooting him with a gun. He needs to get what he deserves. We had the best part of a week and a studio bound set to film the final revenge. There is a point to prove with these things. you want to show off.

Is this film about societal misogyny? The reason I ask is because it feels like a final, violent reaction to what is commonplace to women. Victoria Smurfit’s character is introduced with someone being a pervert and Jonathan Slinger is fairly disgusting to both of the leads. Critical commentary on ‘lad culture’ too?

There are actually more male victims in Bait than there are female. The fact is they (Jeremy and Si) don’t care who they hurt as long as they get what they want. Male, female, young, old, if you are in their grasp, you are in trouble. These people are sociopaths. We had a psychiatrist working with Jonathan in the run up to filming. The last thing we wanted was a one dimensional “gangster” grandstanding across the screen.

I knew Jonathan wouldn’t do that and he wanted to research Sociopathy as much as he could and do the script justice. He read books and researched until he was happy. The main themes of the film to me are – What do we mean by evil? We throw the word around to explain away terrible behaviour. Tabloid newspapers use the word to justify awful acts of selfishness. “They’re just evil”. 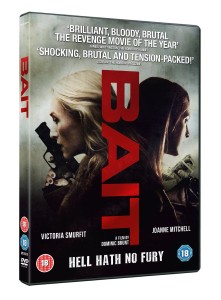 If you don’t believe in “evil” (and I don’t), what then? Also the fact that wherever there is ambition, there is someone there ready to exploit that ambition. The whole film is allegorical and relates to the banking system and the fact that there is no empathy, just numbers and accounting and profit above ALL.
We all now live in a world run by accountants with no affinity towards the human. It seems that philosophy and kindness are drowned by the sheer size of the machine which has been built to deal with “the money”.

Thanks for talking to us Dominic.

You are so welcome, I am such a huge fan of SCREAM MAGAZINE. I get every copy.