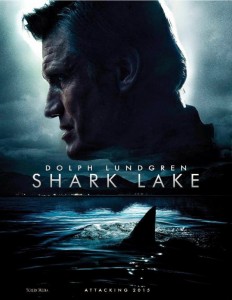 You may know Dolph Lundgren for his roles in The Expendables, The Punisher and Universal Soldier and now the ultimate fighting machine is preparing to team up with one of the most vicious, deadly and unstoppable forces – the shark.

Lundgren stars as an illegal exotic animal dealer, that lets loose an abundance of malicious sharks that have a thirst for blood. If you thought sharks were inclusive to the sea, then think again, as Shark Lake situates the sharks in a lagoon of fishers, frolicking teens and children. Jerry Dugan is directing whilst Robert Kurtzman will be doing the visual effects.

Synopsis:
Sara Malakul Lane plays Meredith Hendricks the best police officer in the small and unexciting town of Lake Tahoe. Clint (Dolph Lundgren) is given parole from prison, and as he returns to the town, it’s clear that his lake of sharks has started catching the attention of the local law. The lake is a popular spot for swimming, so as the sun makes the water irresistible, everyone who enters meets a gruesome and impossible fate. Meredith and her team realise they’re dealing with a much bigger problem than just the one shark.