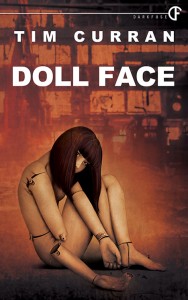 ‘They were in danger. Incredible danger. He could feel it moving around them in the darkness like the cold coils of a snake. It was circling them, pressing in ever closer, grinning with long white teeth and watching them with hungry, ebon eyes.’

Doll Face is another top notch horror from the warped mind of Tim Curran. This is definitely not a slow moving psychological horror that has you leaning towards the edge of the seat as it builds the tension, Doll Face pretty much throws the horror at you almost immediately and never really takes its foot off the pedal.

A group of college kids, as you would expect perfect fuel for a disturbing horror filled fire that just won’t stop burning. A turning off the highway brings them into the town of Stokes, Chazz, drunk and insisting this shortcut would save them 20 minutes, will of course rue the day he took that turning, if he stays alive.

First glance a normal town, nothing out of the ordinary until, BANG followed by a double thump as he hits someone crossing the road and runs right over him. Arguments ensue, stay or run, the usual, until they see what it is they hit and then it moves, a siren sounds and reality as they know it is about to shift beyond belief. You don’t just leave Stokes, there’s something there that will do its utmost to keep you from ever leaving and it will take your mind, your body and things you could never possibly imagine.

As the kids split and with no apparent way out, we rapidly bounce from one to the other as the horrors they envisage come true, their worst fears laid out before them, changing, relentless and its bloody intense.

The story explores the depth of some of the characters and the history of Stokes as it barrels through each disturbing outcome, there’s the familiar horror filled sexual liaison that Tim Curran describes so well and some gruesome fatalities. The terrifying intensity was attained early on and never really relented, which is not a bad thing, it breeds a fast and entertaining read that keeps your attention but as a result comes dangerously close to repetition.

Tim Curran has a frightening imagination and has written some highly recommended horror tales such as Puppet Graveyard, Nightcrawlers and the western horror Skin Medicine.