Dogs to Be Unleashed on Blu-ray in January

The cult classic horror-thriller Dogs is gearing up for a blu-ray release this January courtesy of 88 Films. The film will be unleashed on 8th January in a two-disc limited edition as part of the 88 Vault collection. Other films in this series include 1972’s Pigs, 1973’s Joe Bullet and the direct-to-video Creepozoids which was released in 1987. 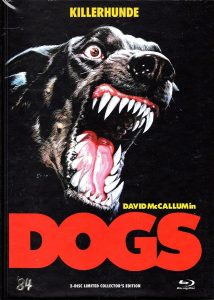 Dogs comes from director Burt Brinckerhoff who’s directed episodes of Nine to Five, Scarecrow and Mrs. King and Promised Land. Simply, the film follows a pack of dogs that go on a killing spree, so expect dogs to attack little old ladies, jump through windows and tackle men with guns. I can imagine the film has aged a hell of a lot since its original VHS release, but is certainly a must-have for those who are keen to widen their film collection.

Dogs stars David McCallum, Sandra McCabe and George Wyner. Be sure to pick up the film on 8th January 2018.