The vampire documentary The Trail of Dracula is set to be released on DVD on 25th October. From director David Mitchell, the feature will look at the original novel by Bram Stoker, the history of the vampire genre, Dracula’s link to Vlad the Impaler and the novel’s controversial release in Romania. It will also feature intriguing interviews with Bela Lugosi, John Carradine, Christopher Lee, Udo Kier, Francis Lederer and Werner Herzog. This is all packed into a 63-minute feature and there is an additional 94 minutes of Dracula movie trailers from 1931, right the way up until 1976. 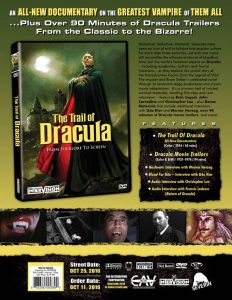 It definitely sounds like a must-have for fans of Dracula himself, but also the vampire horror genre in general. With additional interviews with critic Kim Newman, historian Jonathan Rigby and son of the “Dracula professor” – John Florescu, it’s packed full of a variety of industry knowledge and opinion.

The Trail of Dracula will be released on 25th October.