Joshua Zeman, director of Cropsey and Killer Legends, is about to unleash his latest horror-tinged true crime doc with The Killing Season, which will premiere on A&E on November 12th. You can check out the first-look teaser below.

The 8-episode series sees Zeman reteaming with researcher and documentarian Rachel Mills to investigate the unsolved murders thought to be the work of the Long Island Serial Killer, or Craigslist Ripper. The killer, who has never been caught, is believed to have been behind the murders of between 10 and 17 sex workers, killed over a period of 20 years. The remains of the bodies were found in 2010 and 2011, all dumped along Long Island’s Ocean Parkway, and the area of Jones Beach State Park in Nassau County. Talking with cyber-sleuths, journalists and the victims’ families, Zeman and Mills uncover evidence and connections that suggest Long Island is just the beginning.

“The Killing Season takes viewers on a chilling ride through the unknown and is a perfect example of impactful storytelling that drives the cultural conversation,” says A&E’s EVP and Head of Programming, Elaine Frontain Bryant. 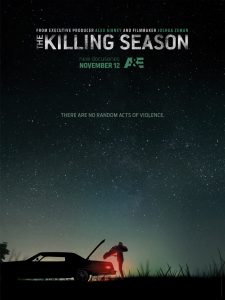 Uncovering eerie connections to numerous other unsolved murders, Zeman and Mills’ series highlights the increasing amount of sex workers targeted by killers who use the Internet as their virtual hunting ground. All-too-many of the victims are never accounted for, and their murders are far less likely to be solved. Here’s the official word:

This gripping eight-episode series is a deep-dive into a world of serial murder rarely seen before, going beyond pop-culture stereotypes to expose a real-life American nightmare. However, with the help of Websleuths.com and data journalists, Zeman and Mills learn that everyday citizens can make a difference — by uncovering clues that police cannot, in hopes that one day “The Killing Season” will end.