Mike Flanagan’s adaptation of Stephen King’s Doctor Sleep will be heading to home video in the new year—along with about 30 minutes of previously unseen footage.

The extended Director’s Cut will clock in at a full 3 hours (180 minutes). By comparison, the theatrical cut was just 152 minutes. 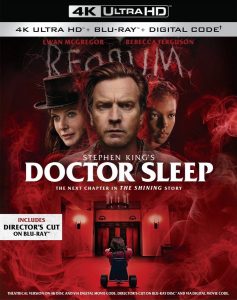 A sequel to both King’s novel The Shining and Stanley Kubrick’s adaptation of it, Doctor Sleep follows a grown-up Danny Torrange (Ewan McGregor) who has turned to the bottle to deal with the trauma he experienced at The Overlook Hotel as a child. After encounting Abra (Kyliegh Curran), a child with a “shine” even more powerful than his own, he realises he must confront the ghosts of his past if he’s going to protect her from The True Knot, a group of predators that feed off innocents, led by Rose the Hat (Rebecca Ferguson).

While Flannagan hasn’t given too much away about what’s included in the Director’s Cut, he has said that it will be more “literary,” including additional material that will be familiar to fans of the novel and a new structure that breaks the film up into chapters. He’s also teased a more in-depth look at Abra’s powers and the way they affect her parents, and more of Wendy (Alex Essoe) and young Danny (Roger Dale Floyd).

The extended cut of Doctor Sleep releases digitally on January 21st, 2020. The Blu-ray release, which includes both the extended cut and the 4K UHD theatrical cut, will be available soon after, on February 4th. Check out the trailer for the home video release below, and keep on shining.