Synopsis:
Duane Lewis is a timid New Yorker leads an uneventful life until he is fatefully exposed to the pulsating rhythms of a brand-new genre of music: disco. Unable to control his murderous impulses that stem from a traumatic childhood experience, Duane transforms into a dangerous serial killer exiled to Montreal.

Discopath is written and directed by Renaud Gauthier and stars Jérémie Earp-Lavergne, Sandrine Bisson, Ivan Freud and François Aubin. Set in the pulsing 1970s, Discopath is a fun and playful homage to the exploitation films of that era. In the directors seat Gauthier has lovingly crafted a thoroughly enjoyable genre piece which is essentially a ‘70s inspired slasher flick. It plays to all the usual tropes of the genre and is undeniably a fun film.

From the opening scene Gauthier wastes no time in capturing the mood of the ‘70s through a carefully crafted foundation of flares, disco balls, flashing dance floors, afros and a pulsing disco soundtrack. Jérémie Earp-Lavergne’s character finds himself fired from his job and meets a young woman from his past played here by Katherine Cleland. They make plans to go out to the local disco but the repetitive rhythm of the music played sparks off a murder spree that spreads from New York to Montreal.

In the role of the Discopath, Jérémie Earp-Lavergne’s performance is played with finesse and an interesting sense of vulnerability. He does a decent job and despite his struggle with his English speaking scenes he still manages to keep up the momentum required to make the role credible. This said, the rest of the cast are not as strong but this isn’t such a bad thing considering the majority of the cast are there to serve as cannon fodder.

Surprisingly the blood and gore are kept to a minimal but the lack of gore is not an issue as the events of this film go to some incredibly disturbing levels. One particular scene in a basement where Lewis is torturing a victim will no doubt make a few viewers laugh unintentionally due to the limitations of the effects but for all intent and purposes, this scene becomes inherently dark and is probably something you won’t be forgetting anytime soon.

As the film moves into it’s final act, it changes in tone and takes a sharp turn into comedy. The lead character goes to some outrageous lengths to escape the policeman who are hot on his trail but this turns the experience into a hilarious game of cat and mouse. This involves a ten minute chase sequence involving multiple costume changes and poorly directed action pieces. This is my only gripe. The sudden shift in tone makes the ending feel somewhat disjointed which is a shame as the first two acts are considerably darker and disturbing. In tacking on a comedic final act for the film Gautheir takes away a large chunk of the credibility from the rest of the film.
Gripes aside, I was thoroughly impressed by Discopath. It is an almost solid genre piece and a fantastic feature debut for Gauthier. He mixes some outrageous comedic moments with some incredible scenes of horror to create a 70s inspired slasher exploitation film like nothing you would have ever seen before. It is for this reason that Discopath deserves a much wider audience and I hope with the upcoming release that it gets it. 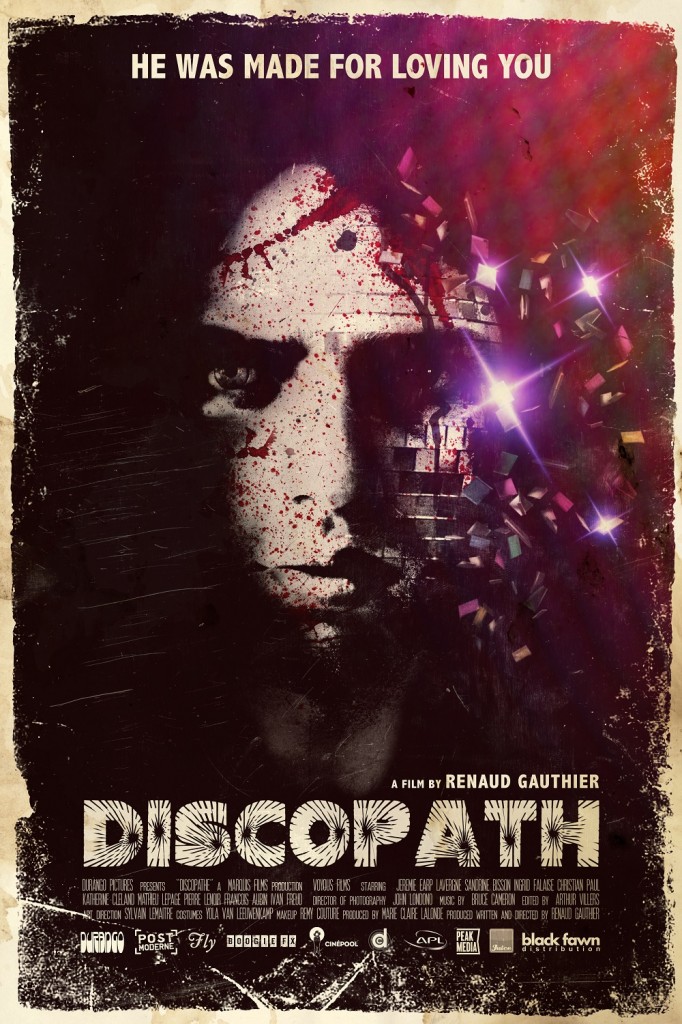