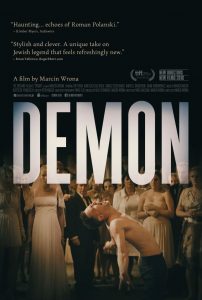 Giving a fresh twist to the Jewish folkloric Dybbuk (a malicious possessing spirit), Demon is set for a September release. Ahead of then, distributor The Orchard (Southbound, What We Do in the Shadows) has put out this stark and unsettling new trailer.

Newly arrived from England to marry his fiancee Zaneta, Peter has been given a gift of her family’s ramshackle country house in rural Poland. It’s a total fixer-upper, and while inspecting the premises on the eve of the wedding, he falls into a pile of human remains. The ceremony proceeds, but strange things begin to happen… During the wild reception, Peter begins to come undone, and a dybbuk, the iconic ancient figure from Jewish folklore, takes a toehold in this present-day celebration-for a very particular reason, as it turns out.