Having recently wrapped shooting in Toronto, Filipino director Yam Laranas is now in his fifth week of post production on his psychological chiller, The Wanting. Laranas, who helmed 2008’s The Echo and crime horror The Road, shared this ‘mood shot’ for the film via twitter on Monday, accompanied by the words “December is almost here.”

The film – said to be in the vein of Rosemary’s Baby and The Exorcist – stars Adam Brody (Jennifer’s Body, Scream 4, pictured), Amanda Crew (Final Destination 3, The Haunting in Connecticut), Dayo Ade (Unthinkable) and Zoe Belkin (Carrie). 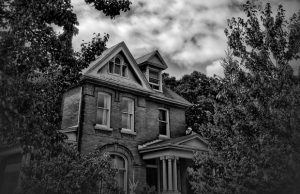 The film is based on a short story by Gin de Mesa and Yam Laranas, and centres around “…an all-American couple whose dream of starting a family is shattered after they move into the perfect New England neighbourhood. Once settled, they soon after descend into the depths of terror as they struggle to survive a genuine threat from a dark presence that appears to want to end their very lives.”

Keep a look out for The Wanting sometime soon.