Director Revealed for the Remake of Suspiria 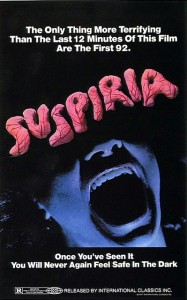 Another day, another announcement about a horror remake. This time, we have the news that the remake of Dario Argento’s evocative and surrealist nightmare Suspiria may have landed itself a new director.

David Gordon-Green was originally attached to helm the remake of Suspiria, but in 2013 he announced that it probably would not happen – and it hasn’t, so far. Talks surrounding the film died down, but during an interview with Empire magazine director Luca Guadagnino has recently said, “I have a very strong interest in German literature and film, so I think [my] Suspiria will have to focus very strongly on that moment in history, in 1977, when Germany was divided…” Calling the remake his own definitely sounds like he’s going to be the director, right?

Luca Guadagnino is the director of the tragic love story I Am Love, which is rather beautiful. As a fan of the original film, hopefully he will be able to channel his passion in to a worthy reinterpretation of Argento’s stunning Suspiria. Gordon-Green did say that he planned for a great Italian director to get his hands on the remake, and it appears that this has been the case.

Earlier this year it was announced that a television spinoff series based on Suspiria had been greenlit with Dario Argento on-board as an artistic supervisor. The show is said to follow a Sherlock Holmes style story, with De Quincey investigating various supernatural mysteries. It certainly sounds intriguing, especially with Argento involved in its production.