MICHAEL CHAVES TALKS THE CONJURING: THE DEVIL MADE ME DO IT 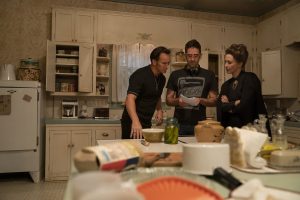 The Conjuring: The Devil Made Me Do It will temporarily be closing the doors on haunted houses.

The previous instalments in the franchise – 2013’s The Conjuring and 2016’s The Conjuring 2 – established Ed [Patrick Wilson] and Lorraine Warren [Vera Farmiga] as real-life paranormal investigators. Inspired by their files, these two chapters unfolded in homes where insidious spirits terrorised the families.

Creeping into theatres and HBO Max on June 4, the Conjuring 3 shifts gears by combining legal drama with the supernatural. This entry centres on the trial of Arne Johnson, a 19-year-old who slaughtered his landlord in 1981. The case served as the first time in U.S. history that lawyers argued demonic possession as a defence for murder. The Warrens consequently put their reputation on the line to save Arne’s life… and soul.

“A friend of mine, when they first saw The Conjuring, they thought ‘This is going to be like Mulder and Scully. It will be like The X-Files. It will be a different case for each one,’” director Michael Chaves says during a virtual press junket. “It’s funny because the first one left such an impression that people kept on wanting that haunted house experience. That was the birth of the franchise. With all of these other spinoffs, we’ve seen the haunted house format really well explored and done well. I think with this, starting with James Wan and going down to the studio and everybody involved, they wanted to kick the doors off the haunted house, wanted to take the Warrens into the world. There are so many fascinating things about the Warrens’ lives.

“This takes place in ’81,” he continues. “This is the most futuristic Conjuring Universe movie so far. In the ’80s, the Warrens were both famous and infamous, to the point in their careers where they actually worked with some police departments and on some missing person cases, so much so that either the Department of Justice or the FBI actually issued a handbook on working with psychics. You can actually see it on their site. It’s a PDF, and it’s fascinating. It speaks to a time that doesn’t quite exist anymore, where you had psychics working with police departments. That becomes a thread of the story.”

The movie’s 11-minute opening sequence finds the Warrens visiting the Glatzel household. The parents have become convinced that something unholy is inhabiting the family’s youngest member, 8-year-old David [Julian Hilliard]. Also in attendance is Arne Cheyenne Johnson [Ruairi O’Connor], the boyfriend of David’s sister, Debbie [Sarah Catherine Hook]. After a prayer, and while waiting for a priest en route, Ed proposes a break. Arne takes David up to his bedroom to rest. And that’s when all hell breaks loose….

An evil entity takes full possession of David. In desperation, Ed and Lorraine decide to perform an exorcism. As intense as it gets, nothing compares to a growling David breaking bones, to bend and twist his body in unnatural ways.

“We had this amazing young double, this contortionist kid named Emerald [Gordon Wulf],” Chaves explains. “This little girl, she was 12 years old at the time of filming. Julian, I think, was eight or seven turning eight. She doubled for him. All those contortionist scenes are all in camera. There’s actually no speed effects on there. When she’s on the table lying down, she gets up at that speed. We didn’t speed that up at all. It was absolutely insane.

“What we had rehearsed is that she would do it very slowly,” he continues. “I was like, ‘Oh, that’s going to be so creepy. We’ll just do this slow rise.’ But then after we did it a couple of times, I was like, ‘Can you do anything else?’ And she was like, ‘I can do a really fast version of it.’ And she did that. You could hear everyone on set about to lose their lunch. They were like, ‘That is the most disturbing thing.’ So, we were like, ‘OK, you are going to do it fast. We are going to do the fast version.’ She literally gets up that quickly from lying down, so that’s all real-time. The visual effect is we added Julian’s face onto it.”

To put an end to David’s misery, Arne makes the proverbial deal with the devil: Spare the boy and take him instead. This clearly sets in motion the rest of the film. Days later, a cursed Arne stabs his landlord to death. The police discover him bloodied, wandering aimlessly along a road and completely oblivious to the crime he’s committed. The Warrens must get to the bottom of what, or who, is controlling Arne and prove his innocence… Even if it costs them everything they hold dearly.

“All the Conjuring movies are family dramas,” Chaves notes. “Whenever we have tested this, everybody has always talked about how much the Warrens take centre stage in this. We kept on hearing that in focus groups, I was like, ‘The Warrens are always in the Conjuring movies. What are you talking about?’

“In this one, one of the things people responded to is this is always a family story, but it really comes a Warren family story,” he adds. “As much as it is the story of Arne Johnson and his journey and his experience, the Warrens are also brought into the middle of it. We get to see them as we haven’t seen them before.”

The film’s teaser trailer promises that Lorraine’s clairvoyant abilities are back and stronger than ever. She can receive visions of the past and travel to other planes of existence. Those extraordinary gifts, however, begin to take a toll on Lorraine.

“We get to see this skill in different environments, in a missing person case,” Chaves says. “I also had great fun with it. In the trailer, you can see this shot where she’s in the forest and she connects to the past, she connects to this moment that happens before. That’s actually all in camera. That wasn’t a visual effect at all. We lit that with a giant light and then we had it on track, on this techno-crane and we just moved it around.

“Of course, there are visual effects in the movie, but I think the Conjuring tradition is, ‘Let’s get it in camera. Let’s keep these effects organic, old-school,’” he continues. “In terms of her psychic visions, I was like, ‘I want to have a moment where we transition,’ but it feels unlike anything we’ve seen before.”

Public records, a TV movie and Lorraine’s book about the incident, The Devil in Connecticut, all detail the event. But how skeptical was Chaves about the validity of demons and devils as he researched the case?

“We are telling the story of the murderer,” he adds. “We are telling the story of the other guy. I asked myself, especially growing up Catholic, ‘What do I believe? What is going to be my point of view of this movie?’ That is a question that I honestly still have been wrestling with, like I think we all wrestle with our faith. Ultimately, my belief has to take a back seat.”

The previous Conjuring movies introduced an array of ghastly ghouls that went on to torment in their own respective spinoffs. The wicked doll Annabelle debuted in the first film. Valak the Nun emerged from the shadows in the sequel. Could the Conjuring 3 also launch a new fan-favourite fiend for subsequent follow-ups?

“When James talked to me, I was like, ‘What’s the new iconic monster?” says Chaves. “’What are we going to do? Is it going to be a demon priest? Or is it going to be an evil mannequin?’ Of course, I was just joking with him, but I was honestly so excited. James is the master monster maker. Not only the master of horror, but the master monster maker. With him, from the very beginning, he was like, ‘That’s what everybody is expecting. We are going to do something different.’

“I think this movie is something that is intentionally a different Warren adventure and a different experience,” he concludes. “We definitely have a different adversary that we’ve never faced before, that you’ve never seen before. That in itself is going to be kind of unique and surprising.”