We’ve seen the trouble that cursed video tapes and haunted old Super 8 film can cause, and now the humble Polaroid camera will be stirring up evil in Dimension Films’ Polaroid, set for release next summer.

The feature debut of director Lars Klevberg, Polaroid is based on his 2015 short film of the same name (a winner at the LA Horror Short Film Festival). Written by Blair Butler, it centres around a string of mysterious teenage deaths, all of which have one thing in common; the victims were all photographed with the same old Polaroid camera shortly before meeting their ends. 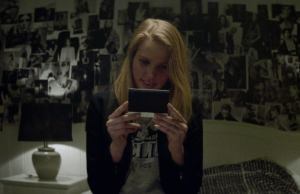 A USA/Norway co-production, Polaroid is produced by Chris Bender, Jake Weiner and Jake Wagner at Benderspink, Roy Lee (The Ring, Blair Witch, The Grudge) for Vertigo and Petter Løkke & John Hagen at El Dorado Films, who produced the short with Lars Klevberg in Norway.